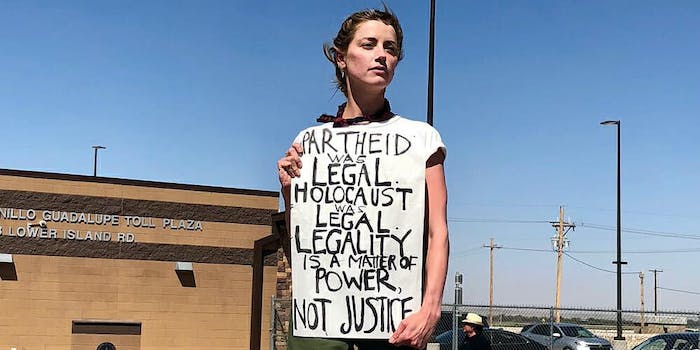 The now-deleted tweet reveals a disconnect in her activism.

Actor and activist Amber Heard is facing stern backlash to a tweet about an ICE checkpoint, which she may have intended to be pro-immigrant but is chock full of racist stereotypes.

Early Tuesday morning Heard tweeted that she’d heard there was an ICE checkpoint in her neighborhood in Hollywood. If she had stopped there, it would have been a fine and useful warning. Unfortunately, Heard continued, saying, “Everyone better give their housekeepers, nannies and landscapers a ride home tonight…” Heard later deleted the tweet, and took a second pass at the subject several hours later.

Checkpoints on your home streets…. Is this the “great” America we’re aiming for? Raids, fences and police-state like checkpoints don’t feel like the ‘land of the free’ our immigrant ancestors built.

But it is the internet after all, so people took plenty of screen caps of Heard’s original tweet. People in the replies to Heard’s new tweet, and across Twitter, are calling her out for her use of racist stereotypes.

Why did you delete your initial tweet? Is that all they are to you? Out of touch much? pic.twitter.com/PmLIaffMQS

Some are pointing out the classist undertones of the original tweet; it is addressed not to those who could potentially be detained, but to the people who employ them. It also implies that these are the only jobs Heard and the people she associates with would hire immigrants for.

In a follow-up tweet Heard appears to characterize the criticism of her original statement as distractions from the real issues, a defensive non-apology which only poured gasoline on the fire.

With this human rights crisis being so politicized, it is hard to make a simple statement w/out it being used to distract from the real issues. Its hard for everyone to not be negatively affected by this subject n some way. pic.twitter.com/nZ0PrMet4G

If you truly did write this then you caused the "distraction". An apology for your words will do nicely. The stereotypes you used are offensive. pic.twitter.com/WdHbS04Tnj

While Heard may characterize the callouts of her original tweet as a distraction, it reveals a pernicious blind spot in her prominent activism. Heard has been active in protesting family separation and detention, including traveling to protest outside a child detention center in Texas last week. However, the kind of casual racism displayed in the original tweet shows a profound disconnect between the ideals and the people she is protesting on behalf of.