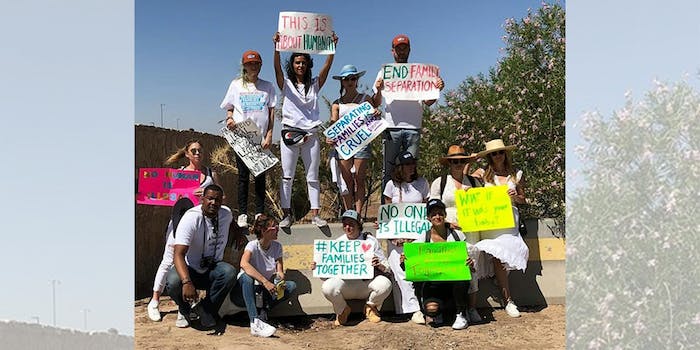 Sia, Amber Heard, Constance Wu, Lena Dunham, and Connie Britton were several of the famous faces among the hundreds of protesters gathered at the Tornillo child detention center on Sunday for the #EndFamilyDetention protest.

Joshua Jackson (Mighty Ducks, Dawson’s Creek) later posted a photo of the group to Instagram with the caption, “This is a humanitarian crisis of our own making.” He also told BuzzFeed News, “I think that would be the shittiest summer camp of all time,” referring to Fox News host Laura Ingraham’s deeply insensitive comment last week that compared detention centers to “summer camps.” At the Tornillo detention center, just 30 miles outside of El Paso, children are being housed in tents.

Sia offered on Twitter to match all donations to Voto Latino, the organizers of the protest, up to $100,000, and also decried Trump’s executive order to end family separation as “PR.”

Help @votolatino do imperative work to protect and serve our asylum seekers. I will match all donations up to $100k please RT https://t.co/hyUdxgmKcM pic.twitter.com/iOPhG5ldyx

Trump's signing of the executive order was a PR move, I am in Texas at tent city and nothing is different. There is no plan in place to reunite families.This is totally inhumane. #stopseparation

Wu arrived wearing a jacket that reimagined the saying on the one Melania Trump wore earlier in the week when she visited a detention facility.

The celebrities flew, then bussed their way, from Los Angeles to the Tornillo detention center, an effort reportedly organized by Lena Dunham. Speaking to BuzzFeed News while at the rally, she said, “It’s deeply important that we as Americans stand up and say, ‘This is not who we are, this is not what we believe in, we do not believe in the separation or detention of families.’”

We came to Tornillo, Texas, to show our solidarity with the families who have been separated, the children who are alone, the parents who are grieving and the undocumented Americans who are losing more than I can fathom. Thank you, Tornillo, for showing us a warm border welcome and reminding us that together we rise. Thank you @amberheard @constancewu @vancityjax @jennikonner @bellathorne @dani_thorne @elsamariecollins @mirasorvino @ioneskyelee @angeliquecabral @ktqlowes @caseyrosewilson @travon @wynter @kendrick38 @therealannacamp @skylerastin @siamusic

Comedian Travon Free, who writes for Full Frontal With Samantha Bee, spoke from a different perspective than Dunham, highlighting the history of separation the U.S. government has instituted, from Native American to Black families. “The notion that this country is still doing something that it’s done for almost the entirety of its existence, which is separating people from their families, is an atrocity,” Free told BuzzFeed News.

While the celebrities were all there in solidarity, they largely kept off the microphone. Filmmaker Rob Reiner spoke briefly, as well as Mexican labor and civil rights activist Dolores Huerta; Kerry Kennedy, the daughter of Robert F. Kennedy; and Julian Castro, a former U.S. secretary of housing and urban development.