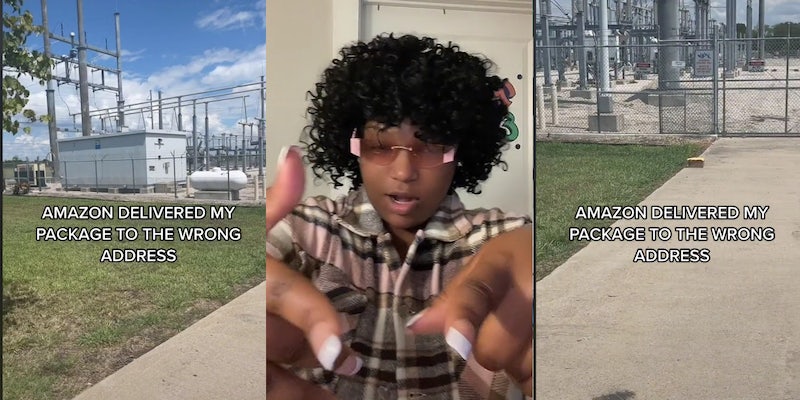 ‘Amazon was like ‘this gonna have to do”: Amazon driver incorrectly delivers customer’s package to electrical plant

'Why the f*ck would y'all deliver my sh*t to this place?'

An Amazon customer recently went viral for sharing how the delivery company left her package at the wrong place.

TikToker Kay Brynell (@kaybrynell) saw that an item she ordered off of Amazon was marked as delivered, but couldn’t find it at her home. Upon further inspection of the photo the driver provided, Brynell was able to ascertain that the package wasn’t left at her house, but a nearby electrical plant.

Amazon’s profits soared to record highs in the wake of the COVID-19 pandemic as more folks than ever relied on the online retail giant’s business model to have essential goods delivered to their homes. This increase in product plus delivery demand also brought with it a greater need for more drivers and personnel. By June 2020, Amazon brought on an additional 175,000 workers to help meet demand. However, many of these hires were furloughed or laid-off once orders began slowing down, and in the company’s race to get drivers on the road, many training protocols were either packed into a short amount of time or skirted altogether.

Theoretically, this means that there are a number of delivery drivers who are delivering packages with incomplete training. Either that or they’re so overworked that they don’t have time to double-check wherever it is they’re dropping off the packages.

Whatever the case may be, this results in inconveniences for customers like Brynell who are sometimes left wondering where their packages are.

Brynell writes in a text overlay of the video, “Amazon delivered my package to the wrong address” while recording an electrical plant a few feet away.

She can be heard saying on camera, “Now that I’m back home, Amazon, why the fuck would y’all deliver my shit to this place. Do it look like anybody live here. I know y’all shocked I order shit every week but look…”

Other TikTok users were cracking up at Kay’s post and found the situation hilarious. Some said that they couldn’t wait to use Kay’s recorded voice for their own posts. While others came up with some clever finesses of their own to implement against the online retail giant.

“I would’ve taken it home and then tell customer service it wasn’t delivered to the right address for a full refund,” one user wrote.

“I’m impressed that you found it lol,” another shared.

“Who they thought you was? Electro??” a third quipped.

Similarly, another Amazon customer claimed that one of their packages was incorrectly delivered to their apartment’s sprinkler room. “Amazon delivered my package to my complex’s sprinkler control room that is clearly labeled as sprinkler room,” they wrote.

Brynell noted in the comments that the image the driver took of the package post-delivery is how she was able to discover her packages were being brought to an electrical plant in the first place.

“Girrrlll how did you know to look there?!!” one TikToker asked.

The TikToker responded, “They uploaded the picture after they delivered, so I looked for the rocks and gates in the area.”

Other commenters couldn’t believe that a driver thought that was a decent place to leave a package and didn’t think to contact Kay to ensure they had the correct location.

“Amazon was like ‘this gonna have to do,'” one user wrote.

“This driver took this package to this location took a photo and said yeah that’s where this is supposed to be for sure and drove off lmao,” another stated.

Some TikTokers relayed their own delivery fails with Amazon, like a user who said that their driver called to inform them that because they couldn’t find their house, they just decided to bring the package to another location instead.

“One time the driver sent me a message saying they delivered my package to someone else’s house because they couldn’t find mine,” one viewer shared. “Unbelievable!”

“One time they marked it as left with front desk or reception and it was by my little garden gnome,” a second added.

Folks who said that they used to work as Amazon delivery drivers chimed in to shed light on the situation from their perspective, too.

“As a former driver, I promise it’s that damn app that creates the route,” one viewer claimed. “One time it told me one of my stops was in Africa.”

According to US Global Mail, the percentage of Amazon failing to deliver a package to the correct addresses is less than 1%. However, with 1.6 million deliveries in a single day, that means there are still a large number of people (not relative to the number of successful deliveries) who are left scratching their heads and searching for what they’ve ordered.

The Daily Dot has reached out to Kay via email for further comment.