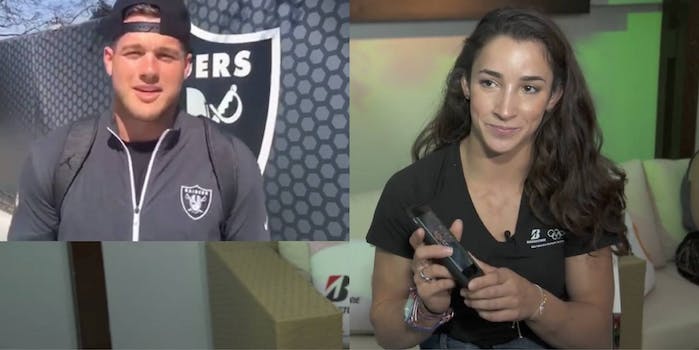 You know what they say: If at first you don’t succeed at getting your friends to match you with an Olympic medalist, try to get her attention on social media… or something like that.

After getting together following a video Q&A, Olympic gymnast Aly Raisman and NFL tight end Colton Underwood are officially dating. The couple made their debut on Monday at the Sports Illustrated Sportsperson of the Year ceremony in New York City.

Raisman told People that she and Underwood have been dating since the MTV Video Music Awards, just over a week after Yahoo News published a video of the couple’s “meeting.”

During the video Q&A, Raisman watched a video of Underwood, who asked her to go out with him and their mutual friends, retired gymnast Shawn Johnson and her husband Andrew East, the next time she’s in the San Francisco area.

“Did Shawn put you up to this?” Raisman asked before watching the video. “They’ve actually told me about him before, he’s very cute… Yeah, I would go on a date with him.”

After the video’s taping, Raisman responded to Underwood via Twitter.

@Colt3FIVE thanks for the sweet video…. looking forward to meeting you :)

The pair went on their first date while they both happened to be in Colorado for short periods of time, her 12 hours and him a few days. Then Underwood drove 90 minutes for both their second and third dates. At least he’s seems like a committed dude for someone who basically tried to slide into her DMs?

“I’m just looking forward to 2017,” Raisman told People. “I think it’s going to be an exciting year for everyone.”