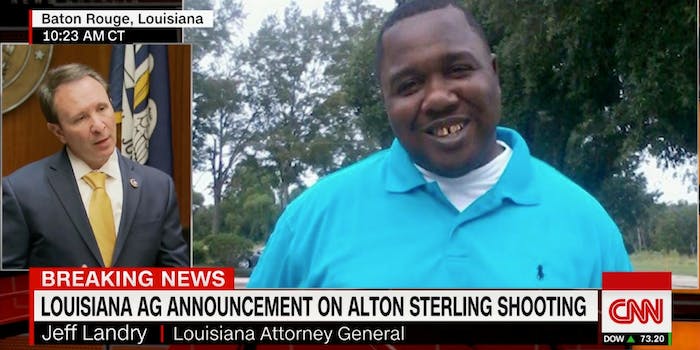 Sterling's family says it will proceed with its civil lawsuit.

The announcement comes nearly two years after Sterling’s death. Sterling, 37, had been selling CDs outside a convenience store when he was approached by two officers, Blane Salamoni and Howie Lake II, responding to a call about a man who had threatened someone else with a gun.

During a 90-second encounter, Salamoni told Sterling, “I’ll kill you, bitch,” before the officers told him to put his hands on the hood of the car. After not complying, one officer tackled Sterling to the ground, while another pointed a gun at Sterling’s head. When one of the officers yelled that he had a gun, another shot him six times.

A video of Sterling’s shooting went viral after his death, showing an officer tackling him to the ground before another officer shot him, inciting social media backlash and protests across the country. Critics expressed frustration at another police-involved shooting in which a Black man was executed without so much as a trial, calling it just another example of rampant police brutality in the United States.

Landry said that the officers “attempted to make a lawful arrest of Alton Sterling based upon probable cause,” and acted on the presumption that Sterling was armed while resisting arrest. The attorney general also pointed to toxicology reports that Sterling was under the influence and subsequently noncompliant during his arrest.

In May, the Justice Department said it would not pursue federal charges against Salamoni and Lake II, the first time the department declined to prosecute a police officer investigated for wrongdoing under Attorney General Jeff Sessions, the Washington Post reported.

Sterling’s family said it would continue to follow through with a civil lawsuit they filed last year. Salamoni’s lawyer, John McLindon, said he anticipated the department will fire both officers for a violation of policies as a result of the shooting, but that both officers are planning to appeal such firing.

“The system failed us,” Sandra Sterling, Alton’s aunt, said during a news conference, according to the Post. “He was not a monster…This was a family man. A family man.”

Watch the full announcement below: