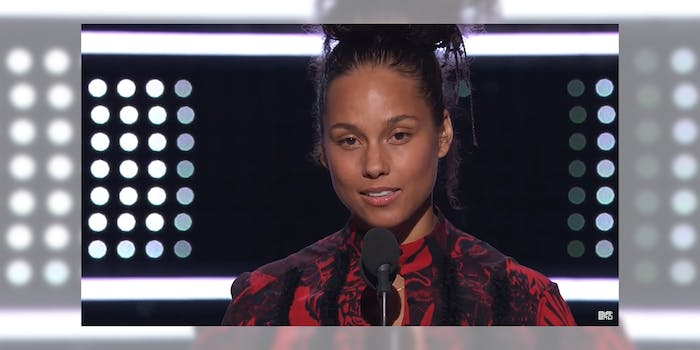 This isn't the first time the singer has shown up makeup-free.

Alicia Keys showed up at the VMAs last night bare-faced in a move that many people applauded.

I love this no makeup movement @aliciakeys has started. I love Alicia period. #VMAs

The singer wrote in Lenny Letter in May that she no longer wants to cover up her face or her soul. After seeing pictures of herself without makeup, she said she felt empowered to “tear down the walls I built over all those years, to be full of purpose, and to be myself! The universe was listening to those things I’d promised myself, or maybe I was just finally listening to the universe, but however it goes, that’s how this whole #nomakeup thing began.”

Since then, Keys has made several appearances without makeup, in her music video for “In Common,” the BET Awards, and The Voice.

The 15-time Grammy Award-winning singer, songwriter, and producer has inspired with her music—and now, she is perhaps inspiring other famous women to go makeup free. In a recent apology video to her fans for canceling a concert, Adele also appeared without makeup.