Read what Albert Einstein wrote to Marie Curie about haters

Another timeless lesson from the world's most famous genius.

The best advice ever given about dealing with trolls comes from someone who never read a single Internet comments section: Albert Einstein.

While Einstein’s 1955 death prevented him from seeing YouTube– and Reddit-style trolling, he witnessed a very early version of it firsthand. In a series of letters released last week and analyzed by astrobiologist David Grinspoon, Einstein wrote to fellow thinker Marie Curie about the disdain she was facing.

Curie, the renowned scientist and first female Nobel Prize winner, had lost a bid for entry into the French Academy of Sciences. This could very well have been because she was a woman and an atheist, two things that didn’t go over well in early 20th-century society, no matter the country. What’s more, public perception of Curie—perhaps for the very same reasons—was just as harsh.

In a bid to reassure Curie that her critics and doubters were misguided, Einstein wrote to her and essentially advised her to “forget the haters.” 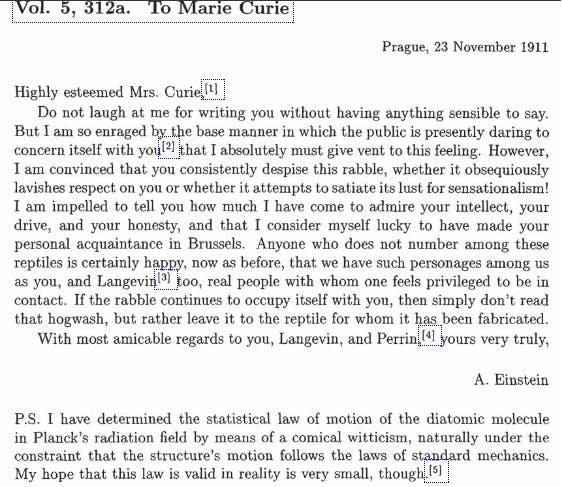 Screenshot via The Collected Papers of Albert Einstein

One can only imagine how Einstein would have responded to a 4chan thread.