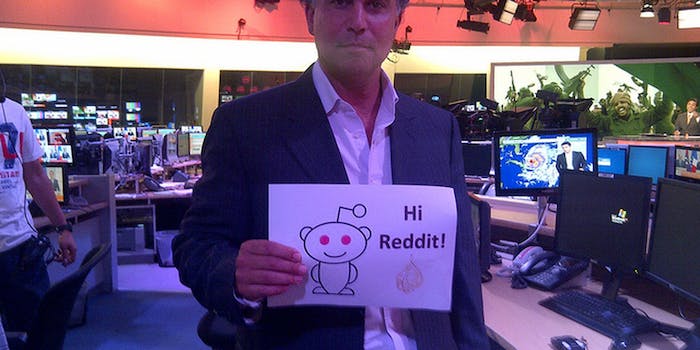 Marwan Bishara takes questions from Reddit, but only the questions he wants.

Bishara took part in a Reddit AMA (“ask me anything”) yesterday, where astute redditors prodded him on a number of issues, from Al Jazeera’s objectivity, to the perception of the United States in the Arab world, to the future of Libya.

The top-voted question at the end of the day was a three-pronger. Redditor downmodmyass, noting that the Arab news station subsists on the generosity of the monarchic Qatari government, turned the discussion inward:

1) Do you feel your channel has the freedom to criticize local government?

2) Do you think democracy is something Qatari people look forward in the future?

3) What do you think Al Jazeera should do to promote democracy in Qatar?

In dodging the question, Bishara showed how robust discussions on the social news site can become.  Other redditors jumped into the comment thread, digging into the questions. “Criticizing the monarchy can (and will) get you locked up in a desert prison,” wrote one, who said he was an Arab and then provided his own answers to downmodmyass’ questions.

Redditors are constantly wringing their hands about a drop in quality on the site. And that anxiety is partially justified — the front page is often little more than a flood of image memes and forgettable jokes, pushed to the top by thousands of easily-dispensed upvotes.

But Bishara’s long session on the site shows how Reddit still has the power to foster unique, enlightening discussions. Sure, Bishara dodged a few tough questions, but other redditors took up the challenge.

Some complain that AMAs are turning into publicity stunts, and that’s certainly true. Over the past year the Reddit section has become an almost requisite stop for Internet-savvy celebrities and companies looking to promote themselves (in the midst of his back and forth Bishara, for instance, found a chance to promote his new book).

But promotional motives don’t necessarily detract from discussion:  Bishara is a former professor of international relations at the American University of Paris. His AMA wasn’t exactly comparable to a day in his classroom. But it did give some pseudonymous strangers 15 hours to pick the brain of a internationally recognized expert on the Middle East. That’s a rarity anywhere.