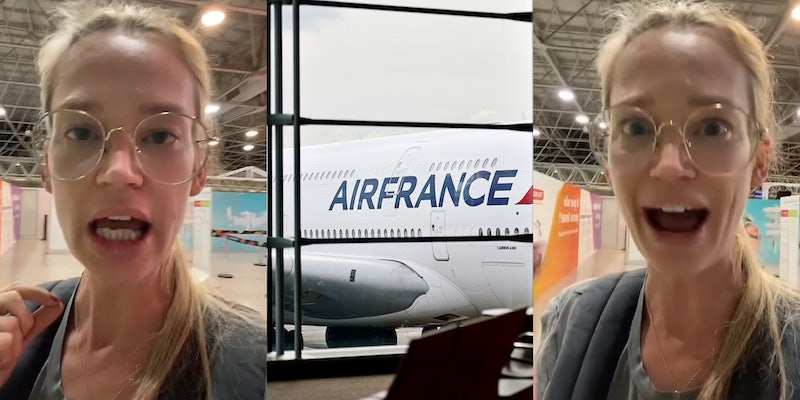 A user on TikTok has gone viral after calling out Air France for putting her family in the economy class after they paid $12,000 for premium seats.

In a video with over 541,000 views, user Eleanor (@dwell_nicely) claims she bought premium seats to accommodate her 6’4” tall husband, their daughter, and, more importantly, their baby. The couple and baby were set to fly from Rio de Janeiro to London via Air France, a trip that requires a layover in Paris and one leg that is over 10 hours long.

“I don’t normally have any problems sitting in economy if I’m traveling by myself, but firstly, I paid $12,000 so that I wouldn’t have to sit in economy with my baby on my lap for a 17-hour flight, or 15 hours—I don’t know. It’s really fucking long,” she says. “My husband doesn’t even fit in the economy seats!”

In a follow-up video, Eleanor says the flight itself was miserable. Both she and her daughter’s chairs were broken, they were given a bassinet that they were unable to use for most of the flight, and the flight was too cold for her comfort.

As compensation for this downgrade, Eleanor says the company offered her 50 euros in cash or a voucher. She selected the cash but was given a voucher instead.

However, browsing Air France’s website, it does not seem possible in the near time to book flights with Eleanor’s details for 12,000 Real, though flights with her details for $12,000 USD are also nowhere to be found.

It is possible that Eleanor was referring to one of the many other currencies identified by the term “dollar”—but regardless of the exact details of cost, users agreed that 50 euros was not nearly enough in compensation for her experience.

“How do you pay 12,000 for a confirmed premium seat and get bounced back to economy and then only compensated that little?” asked another. “Doesn’t make sense at all!”

Many other users said they are taking Eleanor’s warning and refraining from taking flights with the company.

As one user wrote, “Not flying @airfrance…thanks for the heads up!”

The Daily Dot reached out to Eleanor via Instagram DM and Air France via email.