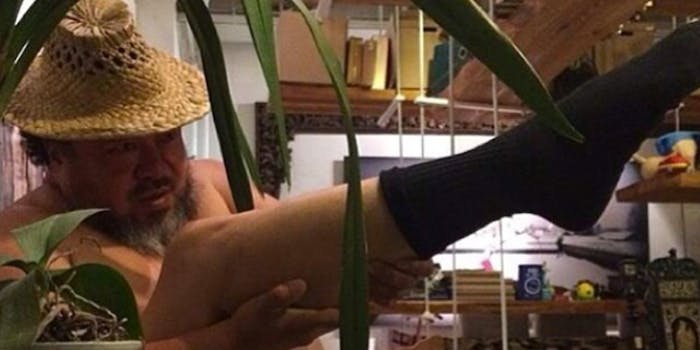 Ai Weiwei, Instagram, and the mystery of the ‘leg gun’ meme

Chinese artist Ai Weiwei has a long history of using art as a form of protest, but his latest act utilizes Instagram in the most curious way: He’s featuring photos of people using their legs as guns.

No, not actual guns, like Rose McGowan’s machine leg in Planet Terror. Rather, people are posing as if their leg is a rifle, and Ai Weiwei has been collecting the images on his Instagram account. This performance started on Wednesday, when he posted a selfie of sorts.

Others followed suit, some acting out shootings or executions, some engaging in solo interpretations.

But what is Ai Weiwei protesting, or critiquing, or signal boosting? The Guardian points out that he retweeted the blog Beijing Cream, which commented that the leg poses look a lot like those in the 1964 Chinese ballet, Red Detachment of Women. An image was posted to his Instagram on Wednesday.

The 25th anniversary of Tiananmen Square also recently occured, though this meme has crossed over from Chinese social media to Western.

Ai Weiwei has not officially commented on the series, but it could be part of a larger art project. He also just backed digital art site The Space. Anthony Tao of Beijing Cream posed a question that applies not just to Ai Weiwei’s Instagram, but the Internet at large:

“Is there something more subversive going on here, or is the point of this to make us over-analyze a silly meme?”