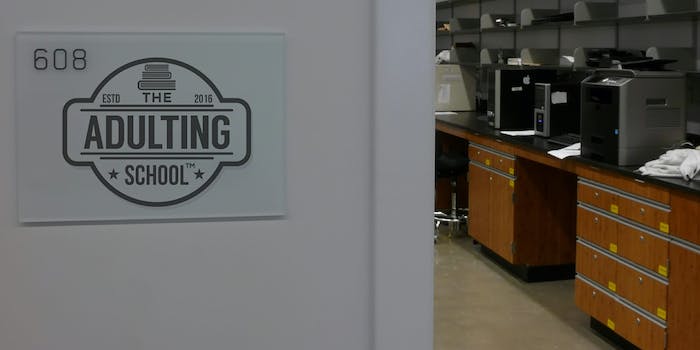 The school everyone loves to hate still hasn't launched.

It’s been three months since the much-anticipated and mocked Adulting School was originally scheduled to launch. An online “school” for resources on how to complete “adult”-like tasks, like changing a tire or properly creating a budget, the site was slated to be a place where young adults can pick up useful home economics-type skills that escaped them in high school and college. For $19.99 a month, all these lessons would be available through online courses, curriculum-based videos, and private social media groups at the student’s convenience—plus a few cocktail networking events at local bars in between.

Of course, where there are lectures for slacking millennials, though, there is backlash. “There are innumerable #Millennials who have learned to be responsible for their time and money completely separately of their families or educations. They learned to do those things in spite of it,” Cosmopolitan bemoaned. “Don’t blame your education or our generation—just do it. In the founders’ own words, ‘You’re smart and capable,’ and you will find a way.”

As someone who is by definition Adulting School’s targeted millennial audience, which often finds itself in the crosshairs of an older generation blaming us for spending too much money on avocado toast and pushing us to go ahead and get pregnant, the lacking interest didn’t come as much of a surprise to me. Millennials love experiences, hate labels, and hold a healthy cynicism for consumerism—being told we’re doing “adulting” wrong and that we needed to pay for a service to address such quandaries is the millennial tale as old as time.

But breaking ranks from the web’s polarized opinions of Adulting School, I was genuinely interested in trying out the service. I am someone who earned a college degree and knows how to set up auto bill payments but cannot follow a disciplined budget of saving 10 percent. I am a person whose idea of “weekly meal prep” involves boiling rice and popping one of those steam-in-bag vegetable mixes in the microwave.

I will admit, though, I’m at a bit of an advantage when it comes to car service and home repairs—my dad is an oil rig operator turned welder turned auto parts specialist turned heating and ventilation technician who taught me how to use a soldering gun when I was in elementary school. But I still strive to be independent of my dad’s advice, and I see the need for something like Adulting School through the people I’ve lived with—roommates who’ve thought liquid soap could substitute dishwashing liquid, others who’ve dangerously rigged kitchen fixtures to avoid going to a hardware store.

When I created an account in February, I was informed that I’d get a trial run of the website for two weeks, then be charged the $19.99 month to month for the subscription.

The site even includes free content, under the “Adulting Collective,” for users who still want use the Adulting School site but don’t want a paid subscription.

However, since all the press hit the internet, co-founders Rachel Weinstein and Katie Brunelle have pushed back the site’s launch from February to June. I haven’t been able to access the Adulting School’s features, save for a few Facebook Live videos of “ambassadors” giving tutorials on cocktail recipes and DIY home cleaners posted to its private subscriber group.

I have also been charged for the service, content MIA. Other would-be subscribers were charged, too. In almost an “adulting” lapse of initiative, I didn’t realize the fee had been taken from my account until seeing a comment from another member of the Facebook group, asking how she could be refunded.

Other group members chimed in, some asking for refunds, and others asking to be removed from the service entirely. Weinstein and Brunelle were attentive and apologetic, and I was refunded less than a week later.

The issue had been remedied, Brunelle said. They had moved subscriber info to a new platform, except for payment information, which subscribers would need to update themselves once the site launched. About two weeks after our conversation, on April 19, I was charged $19.99 a second time.

It seemed Adulting School was having an adulting problem of its own.

While Brunelle apologized for the mistake profusely, keeping in contact to update me with what they were doing to remedy the problem—including moving from their complicated fund-collecting program, SamCart—it seemed the company was having other issues.

In early April, Brunelle told the Daily Dot that the site is going in a different direction, where “peers” can access free content such as blog posts, surveys, life-hack videos as part of the “Adulting Community.” This would also be in addition to the paid subscription classes created by the Adulting School and led online by “ambassadors.”

It seemed that even though media, young adults, and parents of millennials sounded off with resounding interest for—and scathing critique of—the project back in November, Brunelle said the project hasn’t seen as much interest from potential clients themselves. Then after the monthly charging debacle, she shared that about a handful of people had decided to cancel their service, leaving their subscriber base at about 100—though about 20 more if you count the people in the Adulting School Facebook group.

Brunelle is hoping a rebrand will address this. The newly named Adulting Collective is expected to launch next month.

“The changes that we’re making will make everything flow a lot better,” Brunelle told the Daily Dot. “Rachel and I had this idea and this vision for the website and the online school, and what we know how to do only brought that vision so far, so bringing in these experts [a creative director and marketing strategist] is going to be really cool. We flipped our mindset, and this new space is really going to be a ‘collective.'”

I have to admit, I didn’t know what to make of it all at first. Weinstein and Brunelle seemed well-meaning and extremely responsive to me and others, and both times I was overcharged, I’d been refunded in less than a week. But any other company with a track record of accidentally overcharging customers for a promised free trial would be pressed to explain more thoroughly. To keep getting charged when there was no content and the whole model was being redesigned made things even worse. It was a major fuck up, one that more established institutions would have to spend hours explaining in a public relations nightmare.

And yet just imagining how my parents—a pair of hardened, ruthless 60-year-olds—would respond in this situation made me roll my eyes and root for Weinstein and Brunelle further. Adulting School charged people for a service that has yet to exist, something my mom with a career in customer service would immediately report to the Better Business Bureau. My dad would add them to his never-ending list of businesses he refuses to patron and eventually forgets about, among them McDonald’s (for a 2000 incident in which they charged him extra for a Britney Spears VHS tape I wanted in place of a toy) and a lineup of restaurants that took too long to seat us over the past two decades.

While I wasn’t feeling none too impressed with Adulting School, I wasn’t also so dissatisfied as a would-be customer to cancel completely.

To me, it sounds like Weinstein and Brunelle are working toward better business decisions all around. They’ve already severed their ties with SamCart, have begun implementing and explaining the changes on their website, and are currently working on a second round of edits on lesson videos for the site’s trial run.

I suppose my understanding of the situation, coupled with my experience in being a young person who is still making the same trial-and-error screw-ups, has made me more empathetic. I should acknowledge that not everyone has the luxury of having $20 randomly charged to their debit card without financial repercussion, and I’m sure others would rather call out my patience as naivety (“Fool me once, shame on you, fool me twice, shame on me”). But as foolish as I do sound, I can identify the ways in which own experience as an adult mirrors Weinstein and Brunelle’s unchartered venture.

Over the past five years of transitioning through college and post-grad, I wouldn’t have been able to get by one week without the forgiveness of others for the dumb albeit rectifiable mistakes I’ve made. And for that, I don’t mind cutting Adulting School some slack. If that isn’t a valuable lesson in adulting, I’m not sure what is.