Trans women in the r/actuallesbians subreddit were targeted.

The LGBTQ community was founded on unity and coming together to fight against oppression. Unfortunately, not everyone in the community is united, and some particular members are even making a point to push against others who are vulnerable. Trans-exclusionary radical feminists (TERFs), in particular, hold animosity toward transgender women and transgender lesbians.

On Monday, the actions of TERFs have recently led to the temporary closure of the r/actuallesbians subreddit.

In a message to the Daily Dot, Reddit user @Amekyras stated that the drama first started in the r/TrueOffMyChest subreddit, when user @yellowdino76 made a post announcing that trans women are “invading” lesbian spaces. The redditor claimed that trans women are trying to force lesbians to like dicks and accused r/actuallesbians of banning users who disagreed with the alleged comments. Afterward, TERFs migrated to r/actuallesbians to flood the subreddit with similar posts. 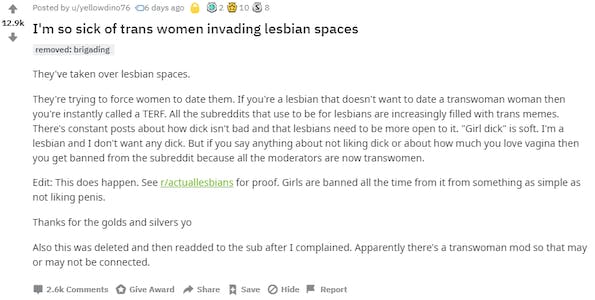 It is common for TERFs to harass and attempt to paint trans women as being predatory. These actions stem from their belief that trans women are not actual women and equate them down to their genitalia, which can make lesbian spaces unsafe for trans lesbians. But r/actuallesbians is welcoming to trans women and does not condemn anyone’s private dating and/or sex life, according to its policy.

Despite the brigading efforts, r/actuallesbians returned “back and better than ever” after a few hours and has reaffirmed its stance in supporting its transgender members and remaining a community space for all women who love women.