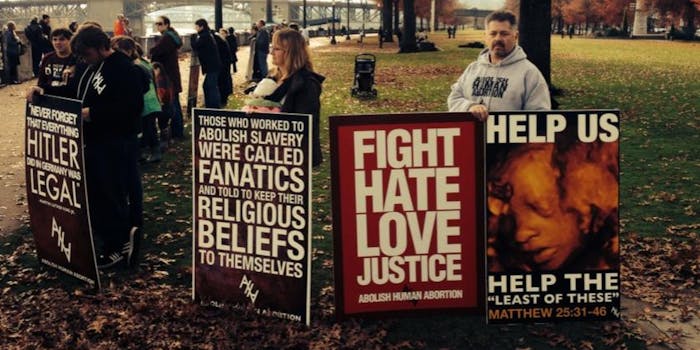 But has the outrage only made the threat more likely to happen?

For the past few days, American pro-choice advocates have been up in arms about a Facebook message that appears to encourage kidnapping pregnant women on the way to abortion clinics.

The message is so inflammatory that it’s been passed around multiple media outlets and gone viral on social media. However, the truth is that there’s no indication that it’s anything more than that: a comment on the wall of a Facebook group.

The first screencap was posted by the Twitter account @FundTexasWomen, a pro-choice organisation. “This really alarmed us this morning,” the caption reads. “Just one reminder that getting an abortion in Texas can be very dangerous.”

The tweet has been retweeted over 950 times since Nov. 10, and subsequently spread to other social media sites via feminist blogs and word of mouth. The screencap itself is of a Facebook comment posted by a group calling itself “Praying for you.” 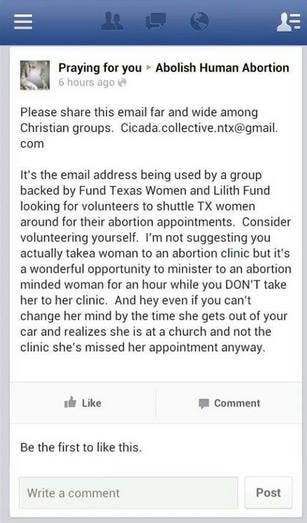 The group in question is Cicada Collective, a Texas organisation that advocates for reproductive justice, including providing the mentioned service of accompanying women to abortion clinics. The main reason why services like this exist in the first place is because women fear harassment from anti-abortion activists if they visit birth control clinics by themselves. Not only does this quote seem to confirm many women’s worst suspicions about anti-abortion activism, but it also adds to the fear they experience when visiting a clinic in the first place.

The quote originates from the Facebook page for Abolish Human Abortion, a Christian anti-abortion group with the slogan, “Bringing the light of the gospel into bold conflict with the evil of abortion.” Ever since the post went viral this weekend, the group’s Facebook page has been inundated with comments from people outraged by the post’s implications: that anti-abortion activists might endorse kidnapping pregnant women. As one Tumblr blogger pointed out, in Texas this could potentially be charged as a first degree felony.

The volume of comments is so great that the official responses are already vanishing under several pages of comments like, “So you advocate KIDNAPPING? Reported.” Writing on Nov. 10 when screencaps the original post first went viral, a representative of Abolish Human Abortion explained that although the message appeared on their Facebook wall, it was from an outside commenter—much like how most comments on their Facebook page now come from pro-choice advocates.

“Yes we deny that we support it. Kidnapping and abortion are wrong for the same reasons, they both violate the inherent rights and dignity of other human beings. It’s really kind of sad when you guys are so low on actual arguments against our actual positions that you have to resort to such transparent tactics of attempting to associate us with every opinion posted to our page. We allow people like you… to post here. Clearly not every post to our page is representative of us.”

In a later post, Abolish Human Abortion went on to say that they had never heard of the group calling itself “Praying for you,” and suggested that it might even be a creation of pro-choice advocates attempting to discredit the abolitionist movement. The Daily Dot was unable to locate the Facebook page belonging to “Praying for you,” which may already have been deleted or renamed.

While there is evidently someone out there who suggested the idea of kidnapping women on the way to abortion clinics, we cannot verify there’s an organised campaign to do so. There are likewise no news reports or other evidence we could find to indicate any such kidnapping has ever actually happened. However, with tens of thousands of people now reblogging and reposting the original screencap, a lone comment has now reached a far wider audience than it ever would’ve done on the Facebook wall of Abolish Human Abortion.

The unfortunate truth is that the viral nature of the screencap may well have made it more likely to happen in real life. The concept of pre-abortion kidnap is already becoming part of the laundry list of fears faced by women who need to visit an abortion clinic, particularly in Texas. In other words, this single Facebook comment is already an effective scare tactic, without any anti-abortion extremist having to take practical action in real life.