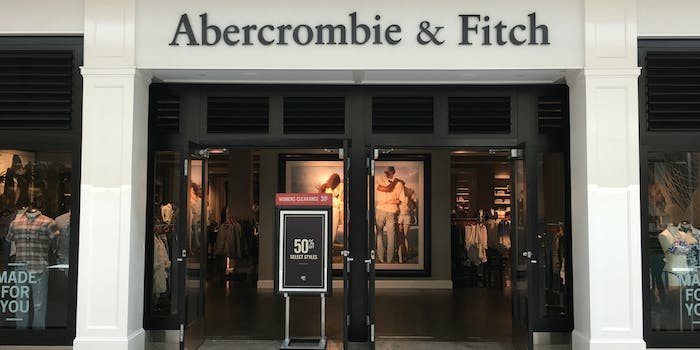 Pride Month isn’t just for LGBTQ Americans—at least, that’s what Abercrombie and Fitch said in a tweet intended to support the Trevor Project. And LGBTQ activists are outraged by the clothing line’s statement.

“The Pride community is everybody, not just LGBTQ people,” Abercrombie and Fitch tweeted, quoting a merchandiser with the brand called Kayla. Intended to promote Abercrombie’s partnership with the Trevor Project, the tweet essentially implies that Pride isn’t by and for LGBTQ people.

abercrombie deleted this tweet of pure ignorance so here are the receipts. pic.twitter.com/S3Ifq71MxE

But Pride is fundamentally centered around the queer community. Created as a commemoration of the Stonewall Riots on June 28, 1969, LGBTQ activists feel that taking Pride away from LGBTQ people is essentially depoliticizing the month. And advocates took to Twitter in protest, mocking the tweet and calling on Abercrombie to do better.

ur brand taking a month to co-opt the lgbtqa for $$ isn't just gross-it's pretty typical. just pull the tweet apologize and fix urselves.

"I just don't understand why Pride isn't about MEEEEEE"

Others made fun of the original tweet’s delivery, noting how its accompanying picture is awkward. The photo looks like a lesbian couple spending time together, except the two women aren’t actually embracing each other. And the original tweet links directly to Abercrombie merchandise, suggesting that the brand just wants people to buy their clothes.

Isn't the pic itself a little weird? #LGBTQ #abercrombie pic.twitter.com/hYEkeLzjMX

It's a link to Abercrombie & Fitch's pride merchandise page. There isn't more that elaborates. I'm disgusted.

Abercrombie later removed the tweet and issued an apology, clarifying their relationship with the LGBTQ community. But many activists argued that Abercrombie did not own up to their statement, and instead simply tried to write off the tweet as a misunderstanding.

Pride is an important time for the LGBTQ+ community.​ At A&F we work to ensure that everyone feels included, respected and empowered. #pride

We are proud to show commitment to the LGBTQ+ community and to bring awareness to the important work the @TrevorProject does. #ANFxTrevor

me looking for the word "sorry" in your tweets pic.twitter.com/4YQOP9ItI6

Abercrombie’s slip up represents a larger problem haunting the LGBTQ community, “marketplace queerness,” where brands latch onto activists for financial gain without actually doing any hard work to aid queer or trans people. In some cases, brands actively hurt the community, and many felt that’s what Abercrombie did by pulling Pride away from LGBTQ Americans.