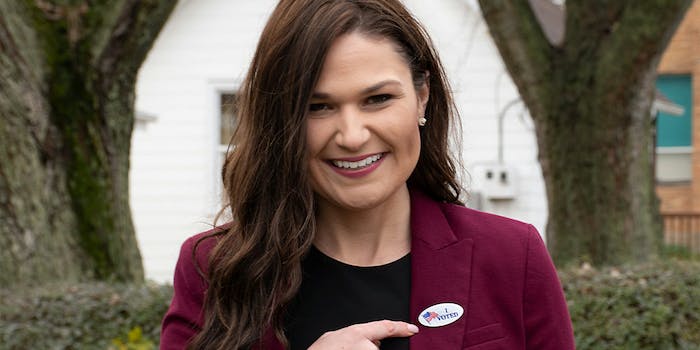 A DACA supporter got elected in Mollie Tibbetts’ district, and conservatives are pissed

Finkenauer is relatively moderate on immigration. But Breitbart's not seeing it that way.

Finkenauer, along with Alexandria Ocasio-Cortez, is the youngest woman ever elected to Congress, at 29 years old. She’s also pro-immigration reform and believes in renewing DACA, both with bipartisan support. She supports ICE. All in all, Finkenauer is pretty middle of the road on immigration.

But conservatives aren’t painting it that way. Because Finkenauer just won in Mollie Tibbetts’ district. And they’re upset.

Breitbart declared Finkenauer won in spite of her “pro-amnesty” stance, instead of because of it.

Tibbetts was the University of Iowa student who was tragically murdered by an undocumented immigrant in August. Initially, conservatives used her death to call for stringent immigration laws.

Then trolls started to attack her and her family for her support of immigrants and immigration policies on social media.

Breitbart harped on the Tibbetts case during its election coverage, calling Blum “a staunch defender of American citizens on the issue of immigration,” and stating that Finkenauer supported amnesty for all undocumented immigrants.

But in an October debate, Finkenauer and Blum seemed to be in agreement about immigration; according to the Cedar Rapids Gazette.

“Both favor border security but not necessarily building a wall; giving legal status to Dreamers, the immigrants who gained temporary legal status through the Deferred Action for Childhood Arrivals policy; and improving E-Verify to help employers comply with the law,” the Gazette reported. Still Finkenauer was painted as an immigration radical.

Democrat Abby Finkenauer, who is running in the same district where Mollie Tibbetts was allegedly murdered by an illegal alien, says illegals "desperately need" an "earned pathway to citizenship" and "we also have to have a pathway for our DREAMers" pic.twitter.com/uAXS9Tnfhi

Donald Trump supported Blum in the lead up to the election, but it simply wasn’t enough to overcome Finkenauer’s strong lead. Finkenauer won with 50.9 percent of the vote to Blum’s 46 percent.