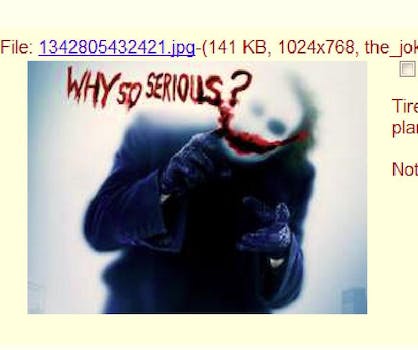 Fake screenshots have appeared on both 9gag and 4chan, but a spokesperson refuted the posts on the former.

9gag has broken its silence about reports that James Holmes, the alleged shooter in Aurora, Colo., had ties to the popular imageboard.

“When we initially heard the rumor that one of our users may have been involved, we did an immediate and thorough search of the site and found absolutely zero evidence that any of the alleged posts ever appeared on 9GAG,” 9gag’s Kim Barsi told the Daily Dot.

“Any reports otherwise are completely untrue and we ask your help in putting this incredibly insensitive hoax to rest. Our hearts go out to the victims and their families and, as the investigation continues, we will certainly help in any way we can.”

The post in question was allegedly sent by 24-year-old suspect James Holmes and featured a photo of a crowded theater with the text “TOMORROW I WILL KILL EVERYONE DURING THE NEW BATMAN PREMIERE IN COLORADO” over it.

A similar conspiracy has been brewing on 4chan, another imageboard known for spreading rumors surrounding tragic events.

On the site’s random imageboard known as /b/, the community has been releasing Holmes’s private information and turning his photo in a meme. One rumor that has been circulating claims that Holmes allegedly posted his plans on 4chan prior to the shooting.

In at least three different threads—most of which have been deleted—users pleaded for someone to submit the screengrab of Holmes’s alleged post. To appease the masses, the following image was posted, but it has been dubbed fake due to its unrealistic post number and shoddy Photoshop work.

“Forget 9gag, forget 4chan, forget anything related to the internet. Be in the real world with this one,” wrote Whitney Phillips, a Ph.D. student at the University of Oregon who studies transgressive humor online within the context of trolling and griefing, in a blog post. “Don’t take this bait. There are other things to talk to talk about here, much more important things, like the fact that the shooter, who was clearly sick, was able to get his hands on some serious weaponry.”