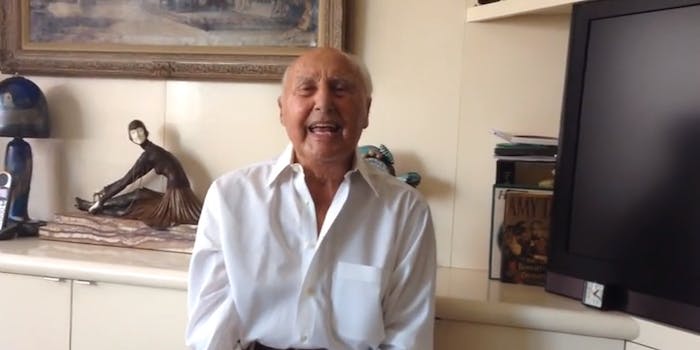 Emery Jacoby and his two sisters survived a concentration camp in Nazi Germany during World War II, but not without unthinkable suffering and personal loss. Both of his parents in the Holocaust.

Seventy years later, Jacoby, now 90, has been passing on his personal experiences to a new generation online. Encouraged by his grandson, he conducted a Reddit AMA (“Ask Me Anything”) earlier this summer, and following a tremendous outpouring of support, he followed up with a personal YouTube video.

His message is one of perseverance, tolerance, and acceptance, of moving forward through the past, as difficult as it might be.

“Let’s embrace the future and the opportunities,” he says, “because the future belongs to you.”

This is probably the best way to spend 90 seconds of your day.

Jacoby has plenty more to offer on the subject. You can follow him on Twitter, or dig back into this moving speech he gave as part of Holocaust Remembrance Day in Newark, N.J., in 2010.