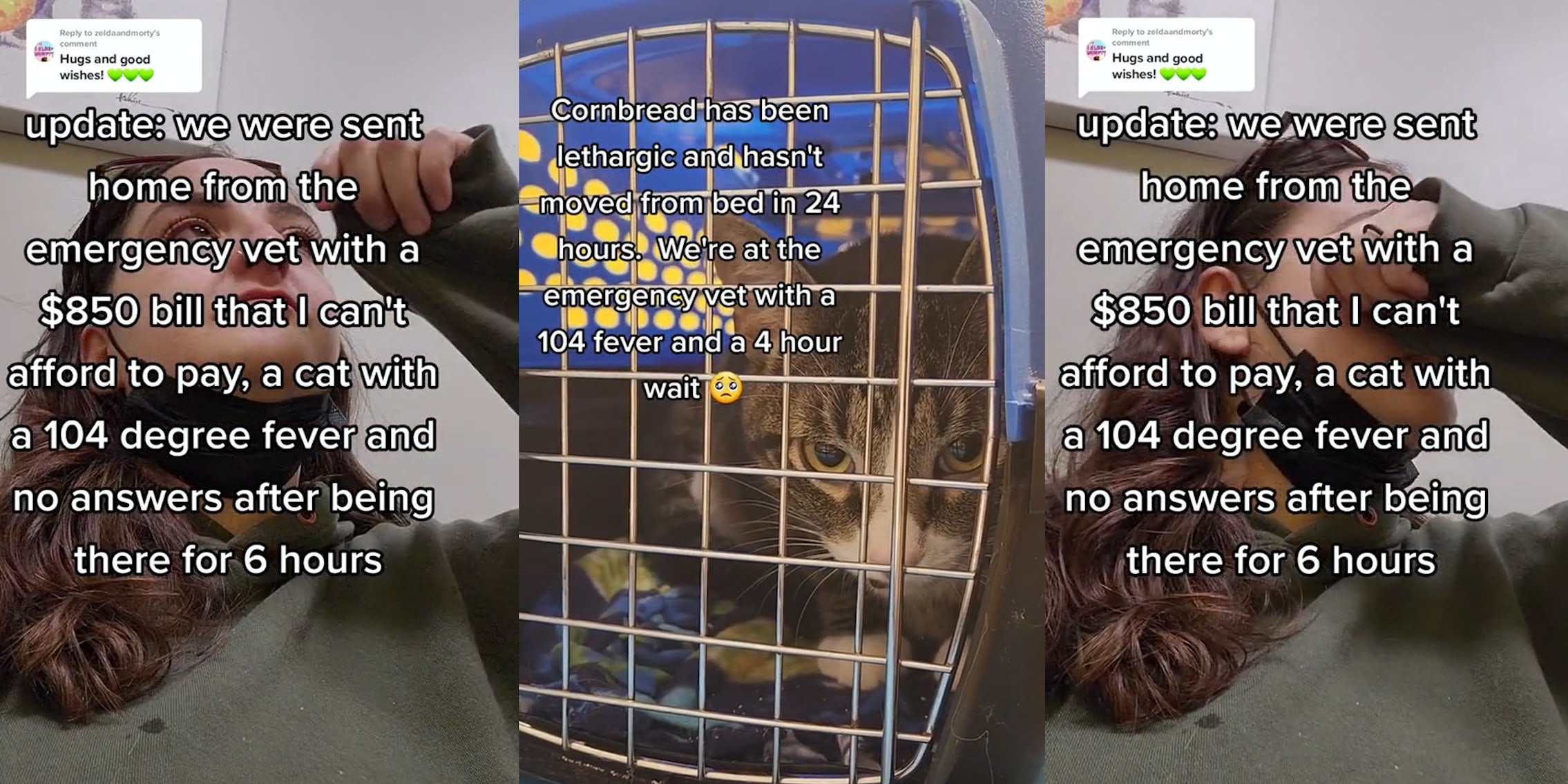 ‘Quit shaming her for being upset about the high bill’: Pet owner says she got hit with $850 vet bill that she can’t afford to pay, ‘no answers’ from vet

A TikToker claims she’s been charged $850 for an emergency vet visit despite getting “no answers” about her cat’s health issues.

In a TikTok posted by Kayla Thompson (@thompsontails), she films a voice telling her “sometimes these cats just have these mystery viruses.” Accompanying the video is an overlay text that reads: “Update: we were sent home from the emergency vet with a $850 bill that I can’t afford to pay, a cat with a 104 degrees fever and no answers after being there for 6 hours.”

The video, posted on Nov. 28, quickly went viral, accumulating over 665,000 views while getting a mixed reception in the comments.

Some commenters were critical of Thompson for not planning ahead and having an emergency fund ready.

“Part of growing up is learning to budget for emergencies,” one commenter said.

“Tip: if you can’t afford a $1000 vet bill do not get an animal! People need to think before they buy that cute cat/dog.”, a second commenter claimed.

Most, however, were critical of the aforementioned stance and offered support for Thompson.

“Quit shaming her for being upset about the high bill. The cat is way better off with her than at a shelter or street. You all need to quiet down,” one commenter retorted.

“Jesus… the comments are ridiculous! I’m sorry, I hope you baby feels better soon,” another added.

In a follow-up TikTok, Thompson addressed the negative comments she’s received. “I’m an animal rescuer, and yes, I’m very aware of the fact that when you adopt an animal you have a responsibility to make sure that you’re financially taking care of them and their medical needs,” she says in the video.

She continues, “However, financial situations change for people very often and we’re currently in a very large economic crisis if you haven’t noticed.”

Thompson also adds she’s been dealing with health issues of her own, and they affected her financial situation. “I almost died from broken heart syndrome also known as stress-induced cardiomyopathy about 3 months ago and I am drowning in medical bills from that,” she says.

Rachel Burger, a friend of the TikToker, started a GoFundMe campaign in a bid to help crowdfund funds which will cover the ER bill, follow-up vet visits, and possible FIP treatment.

The Daily Dot reached out to Kayla Thompson via email for comment.