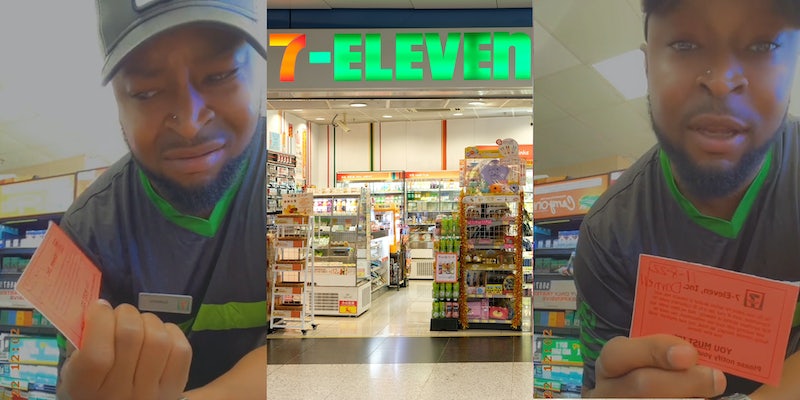 ‘I failed’: 7-Eleven worker says they got red-carded by undercover shopper after not asking for her ID when purchasing alcohol

A 7-Eleven worker who posts under the username @_born2flex posted a viral clip delineating what happens to employees when they don’t ask a customer for an identification card when purchasing alcohol or cigarettes. This had other users on the platform saying that they’d immediately jump ship from the job upon learning of the repercussions associated with such an offense.

According to the TikToker’s video, he received a “red card” from a woman who was attempting to buy beer. He claims it functions as a penalty system for workers. When an employee accrues three of these red cards, they are summarily fired. What’s more is that these dings also carry fines and court orders and if these are ignored then workers could face jail time.

The employee writes in a caption for the clip: “This lady really red carded me from the abc administration she looked over 30 so i DIDNT ask for her ID 2 more and I’m fired so guess what EVERYBODY GETTING ASKED FOR ID!”

He says in the TikTok, “OK so this is what happens when you don’t ID somebody. The bitch that gave me this card looked well over motherfucking 30 but I did not ID her and she gave me this card.”

He says that if he had asked for her ID, he would’ve gotten a green card that signifies he “passed.” He further explains that “you can only get three of these [red cards] and you get terminated” along with a fine you have to pay yourself.

“But I don’t want this job anyway bitch,” he concludes.

@_born2flex This lady really red carded me from the abc administration she looked over 30 so i DIDNT ask for her ID 🤷🏾‍♂️ 2 more and I’m fired so guess what EVERYBODY GETTING ASKED FOR ID! #abc #7eleven #powerball #budlight #identification #fired #lgbt #fyp #fypqge #foryoupage ♬ original sound – user9146308024572

Different states have different laws when it comes to individuals selling tobacco, alcohol, or products that require a photo ID to verify age. Not only can stores be penalized, but individual employees, like the TikToker said, can be as well. If you’re worried about potentially being fined or summoned to court for inadvertently selling products to minors, you may want to look into your state’s laws to become better acquainted with your rights.

These laws can even extend to paraphernalia as well, i.e. selling a glass bong to a minor could also be considered an offense. The store owner/licensee along with the individual employee who sold the item could face penalties and possible charges, as well.

TikTok users who saw the 7-Eleven worker’s post commented that this kind of stipulation would immediately cause them to quit their job. Mainly because they wouldn’t want to deal with the undue stress of customers potentially chewing them out for asking for their ID. Others didn’t want to have to worry about the stress of receiving “cards” from strangers attempting to catch them slipping while on the clock.

However, other folks said there’s a benefit to the card system as “mystery shoppers” themselves won’t fine or penalize you, but the warning system helps to educate workers about the severity of such charges. In other words, some users on the platform were arguing that the red card was actually a blessing in disguise.

“I was a mystery shopper before and them ppl go to JAIL when they sell to underage. Them ppl trying to save you,” a user advised.

“I use to work at 711 & QT, if your not a regular or missing some teeth then you getting carded lmao,” a second wrote.

“I tell my team you ID everyone,” one user claimed. “I don’t care if they have a head full of grey.”

“I was a mystery shopper for 2 days,” a viewer shared. “I felt bad when they wouldn’t ID me so I just gave them a green card and told them to be careful.”

One user claimed they used to be one such shopper, commenting, “Lol I used to do that job, it’s called the Bars program.”

Such a program indeed exists, and stands for ‘Being an Alcohol Responsible Server.’ According to the program’s website, they send their “Checkers” each month, aged 21-25, to stores or restaurant to conduct “mock purchases of cigarettes and/or beer.”

“The purpose of this is to monitor the store employees, seeing if they ask for the customer’s ID prior to asking for money to complete the sale. If the ID is requested, the employee receives a Green Card. If not, a Red Card is given,” the website states.

According to the president of the BARS program, David Gaudet, the process is more of a “training service” than a “mystery shopper” service.

The Daily Dot has reached out to @_born2flex via TikTok comment and 7-Eleven via email for further information.