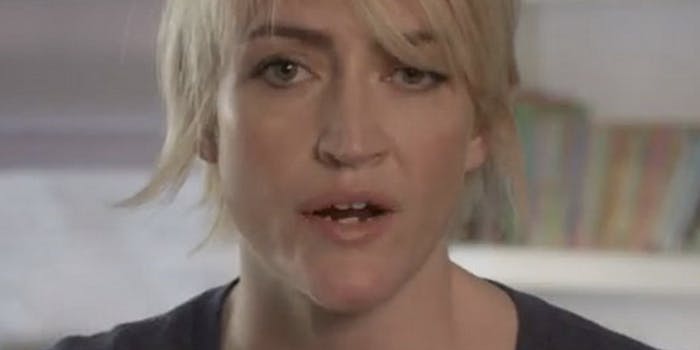 Photo via Get Off My Internets

The 5 biggest Get Off My Internets scandals

GOMI webmistress Alice Wright recounts the snark blog’s most controversial posts from the past two years.

Community members at Get Off My Internets (GOMI) are experts at finding the most shocking scandals about fashion, lifestyle, and mommy bloggers to dissect for their snarking pleasure.

But some gossipy tidbits are juicier than others.

After popular food blogger Jennifer Perillo tragically lost her husband, her friends and fans believed she had been left destitute. A fellow blogger, Gluten Free Girl, reported Perillo and her two children would soon no longer have health insurance and might even lose their home. Readers rushed to her aid, donating $80,000 toward the widow.

However, Wright said, that turned out to be a bit of an exaggeration.

“It comes out that she’s not homeless or destitute; she has a job and is actually buying a new apartment,” Wright said. “She tried to spin it like she knew nothing about her friends putting together the donation pool, but email records show that’s a lie, too. Eventually she said she put most of the money in a college fund for her kids.”

Gluten Free Girl eventually blamed Perillo for misconstruing her need, and the two had a falling out. Perillo did not respond to the Daily Dot’s request for comment.

The GOMI community already didn’t think very highly of Tumblr CEO David Karp or his blogging service. But when the fashion industry began complaining about Tumblr’s Fashion Week incompetence, it was the last straw. Some of the first and largest clothing labels to have presences on Tumblr, such as Ann Taylor, Kate Spade, and Tory Burch, claimed that Tumblr’s former fashion director Rich Tong never even talked to them about a plan for Fashion Week, instead sponsoring little-known bloggers to cover the event.

The community was outraged at Tong’s decision to side with those awful fashion bloggers over their favorite legitimate brands. When Tong was canned, GOMI users cheered.

Trendy women’s clothing store Anthropologie is so popular, an entire segment of the blogosphere has sprung up to chat about nothing else. Called Anthro-bloggers, these writers buy, sell, trade, and review clothing from the chain.

Since Anthropologie isn’t located everywhere, it’s not that unusual for a blogger to offer a personal shopping business, where you can order Anthropologie stuff from her to deliver for you. That’s what a blogger named Anthroholic did, but one day, readers noticed that most of her buyers never received the product they were promised.

“This woman was taking money to source hard-to-find items, and then she would just put them off until the PayPal complaint date passed,” Wright said. “When people started posting about the issue, she disappeared from the Internet. Supposedly she’s been refunding people, but there’s no telling if she would have just kept on doing it if nobody said anything.”

The blogger behind Anthroholic has since closed her blog to all but invited readers, and the Daily Dot was unable to reach her for comment.

Kayla and Checkers aren’t your average parents. After Child Services took away their eldest daughter, their response was to go off the grid and get pregnant again. Instead of any sort of prenatal care, the two lived out of their car and smoked marijuana, blogging all the while.

“People on GOMI just went nuts,” Wright said. “They’re homeless by choice, they already lost one kid to CPS, and now they’re having a second child?”

However, Wright said the scandal actually had a happy ending.

“If you check their blog now, it looks like they’re getting it together. They have their eldest daughter yet and are living in a house with a yard. No idea where they got the money, though.”

Heather Armstrong, better known as Dooce, is one of the world’s wealthiest and most successful mommy bloggers. She also might be one of GOMI’s most constant readers, despite being a frequent subject of GOMI derision. When Wright blogged about Dooce flying to Los Angeles to film a YouTube video, the blogger responded in a big way. She wrote a counter-post on her site (since taken down) titled “Lies,” and sent Wright and GOMI a cease and desist letter.

Dooce forced Wright to make a formal retraction in which she denied the existence of the YouTube video, even though screenshots of the video were easily accessible online. Wright went with the passive aggressive approach, much to the glee of her community.

“Please consider this my formal retraction of my statement, based on tips I received, that Dooce filmed a video for youtube on the date of April 18, 2012, in the city of Los Angeles,” Wright wrote, attaching a screenshot of the YouTube video Dooce filmed.

Photo of Heather Armstrong via Get Off My Internets