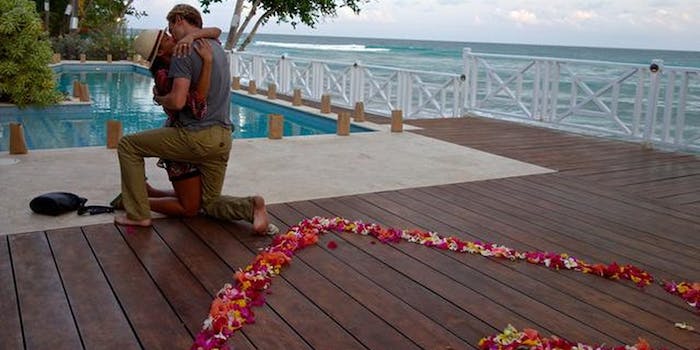 The woman who vowed to make 300 sandwiches for her boyfriend in exchange for vows has somehow become engaged before finishing her 300 sandwiches. Surprise!

But, really, it’s not much of a surprise. Stephanie Smith, the New York Post writer who became known as the “300 sandwiches lady” last fall, after vowing to make 300 sandwiches for her boyfriend in hopes they’d get engaged, then documenting it on a blog, announced on her website today that they’d gotten engaged:

“The day after I arrived in Barbados, E had a big shocker for me: he asked me to marry him.

Words cannot express how extraordinarily happy I am. Not because I have a engagement ring, but because I’m going to spend the rest of my life having ridiculously amazing adventures with my soul mate.”

Back in November, Smith added fuel to the Internet’s infinite rage machine when it was announced she’d gotten a book deal off her sandwich blog. The book is scheduled to be published in February 2015, right around Valentine’s Day, possibly even right around the time they might be getting married.

Her boyfriend romantically detailed his “surprise” proposal plans on Twitter, and tried to make the hashtag #greatestproposalever happen. Smith hinted that the proposal was coming in a May 18 blog post. Excellent synergy, you two!

I found the most incredible, beautiful thing while spearfishing the other day … A diamond ring, size 5.25 pic.twitter.com/rX6GqEWxJW

Guess true love trumps sandwich love. However, Smith’s not off the hook just yet!

Best of luck on your brand synergy, Mr. and Mrs. Sandwiches.