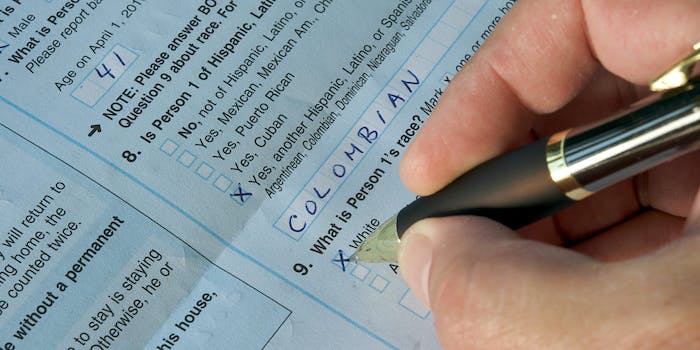 Trump’s slashed 2020 Census budget could mean not all Latinos, blacks will be counted

An inaccurate count could mean a lack of access to public services.

The U.S. Census will already fail to count LGBTQ people, and now communities of color may be at risk, too. According to NBC News, Latino, black, and other minority populations could be disproportionately undercounted for the 2020 Census because of insufficient funding requested by the Trump administration.

Despite population growth, particularly of Latino and Asian populations, the bureau is already hindered by a congressional mandate to spend no more than the $13 billion spent on the 2010 census. President Donald Trump’s 2018 budget proposal for the U.S. Census Bureau is already lower than President Barack Obama‘s 2017 request. Because of existing budget concerns, 2017 field tests in areas of Puerto Rico and the mainland U.S. have been called off, too.

On Thursday, civil rights organizations and census experts held a press briefing regarding the census concern, and called upon Congress to provide resources to ramp up census preparations leading up to 2020. Leaders say the lowered budget request, along with underfunding from previous years, could mean inaccurate counts of minority communities in 2020. This is because the cuts will likely “strike at the heart of operations specifically designed to make the census better in historically undercounted communities—such as targeted advertising, language assistance, door-to-door visits in fearful neighborhoods, and special methods in poorer rural areas,” said Terri Ann Lowenthal, former staff director of the House Census and Population Committee.

Though the census bureau estimates it missed 1.5 million Latinos in the 2010 census, advocate groups say the number is on the low side. A report from the National Association of Latino Elected and Appointed Officials says 400,000 Latino children were part of the undercount. Inaccurate counting during the 2020 census could lead to disproportionate access to accurate political representation and public services, since census data is used to evaluate and implement civil rights policies, like voting reforms and equal opportunity for housing and health care.

“That’s why ensuring a fair and accurate census is a top priority of the civil and human rights coalition… Communities of color, urban and rural low-income households, immigrants, and young children are all at risk of being missed at disproportionately high rates,” Wade Henderson, president and CEO of the Leadership Conference on Civil and Human Rights, said.

Lowenthal also called for Congress to fund the bureau adequately in the years leading up to the real count.

“The (2018) funding request is unrealistic, disappointing, and too low,” Lowenthal said. “We urge Congress to go directly to the bureau, find out how much it needs for 2018, to keep all of the testing, the dress rehearsal, the development of communication campaigns, and the language materials and the like to be on schedule and comprehensive.”