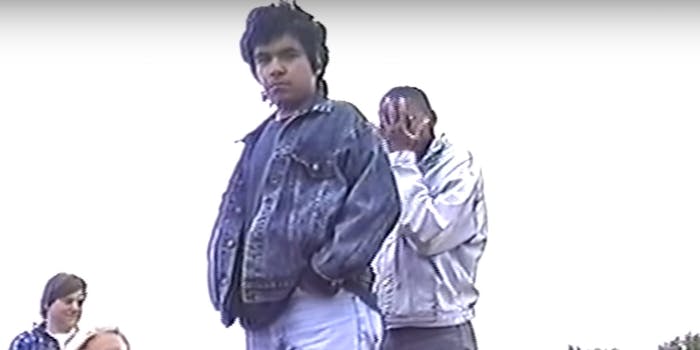 This homemade teen movie is a fascinating time capsule from 1990

In 1990, teenager Josh Burdick took his camera into school for a day. Now it's going viral online.

Josh Burdick’s high school video diary is not the kind of thing you expect to go viral on YouTube. It’s 45-minutes long, filmed in VHS quality, and doesn’t include anyone remotely famous. Yet it’s racked up more than 100,000 views, mostly over the last couple of weeks, and attracted the attention of Reddit‘s video sleuths.

The video is a simple “day in the life” documentary filmed by a teenager in 1990, and it makes for oddly fascinating viewing. The ’90s fashion and grainy vintage aesthetic have a certain nostalgia factor, but it also provides a more authentic look at the glossy heyday of teen movies.

Daily routine videos are now a YouTube genre unto themselves, but in 1990 it was a pretty oddball move to bring a camera into school. Once Josh Burdick’s video went viral on Reddit, people began wondering why someone would even bother to create and upload this weird little cultural artefact, a stream-of-consciousness home movie that feels like something that might screen at an indie film festival.

People even began to psychoanalyse the guy behind the camera, commenting on why he zooms in on a particular girl, or how he deals with a group of grungy dudes hassling him for filming them on the bleachers.

Curious about the origins of this piece of Internet ephemera, we decided to track down Josh Burdick and ask him ourselves. The result was a surprisingly heartfelt story about an awkward teen who viewed high school through a camera lens, and whose life was changed by the movie Back to the Future.

Born in Houston, Texas, in 1972, Josh Burdick was into photography since his early teens and saved up $750 for his first video camera in 1989. “It was at that point that I said, ‘High school is a fleeting moment in life,'” he explained. “So I might as well capture it as it is, so years later I can look back and see what was going on.”

He was his school’s yearbook photographer, and as some Redditors already pointed out, kind of a dweeb. “I was your typical high school nerd, you know? Glasses, pimples, I walked around with a fedora and a trenchcoat a lot of the time. The trenchcoat came around after I discovered Columbo… You know, typical goofy kid, trying to find his identity.”

“It is quite astute, what folks [on Reddit] had to say. I think one of them described me as a ‘tolerable nerd.’

“They noticed that the way I reacted was like someone who is well versed in handling bullies. As I think back to it at the time, that’s exactly right.

“The way I’d cope would be to treat these things with good humor, try to laugh it off, try to be a bit sarcastic, but also kind of hide behind the camera. Taking pictures and shooting video was kind of a defense mechanism because I could be at an event, not because I was there to enjoy it or experience it, but I was there to cover it, like it was a news event or something.”

Most of Burdick’s peers had known each other since kindergarten, but he went to a different school until sixth grade. After that, he was the “new kid” for years. This was where Back to the Future came in.

“In the seventh grade I got suspended twice for fighting,” he told us. “It was basically like, kids were picking on me, and you hit back like John Wayne or something. So I could see I was going down a kind of destructive path. That summer, the movie Back to the Future came out, and I can vividly remember being fascinated by the idea of time travel, and the idea that this life of junior high, this isn’t a permanent state. You know… we’re all going to become adults one day.”

“The other thing that movie taught me was that the future is moldable and it’s changeable. You can go down one pathway in your life that’ll take you one way, or you can [go] down another path. So as a 12-year-old I became self-aware, and that’s when I started saying, ‘I’ve got to remove myself and approach life in a different way, so that I can see the big picture.'”

Thirty years later—shortly after the date when Marty McFly traveled to the future, in fact—the result of Burdick’s pre-teen revelation has now been watched by tens of thousands of people. As for Burdick himself, he moved out from behind his camera as he grew older, although he still occasionally dabbles with a side business as a wedding photographer.

And despite a few awkward moments that now make him cringe when he rewatches the video, he’s pleasantly surprised by all the interest it garnered online as a snapshot of teen culture in the form of a pre-Internet vlog.