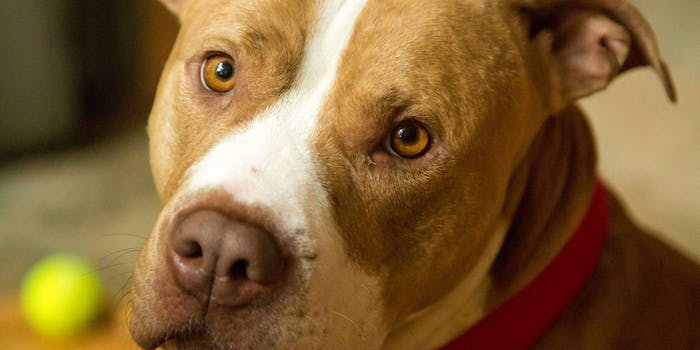 Photo via Sheila Sund/Flickr (CC BY 2.0)

Sit, stay, swipe on Zeppee, the Tinder for pet adoption

Are Tinder and other dating apps not working out for you? In Australia, there’s a whole new way to find companionship, though it’ll come with four legs and some extra fur.

Zeppee is a Tinder-style app for those who have decided they’d rather find comfort in a pet than a human. The app—built by Ben Burton, a car salesman by trade, and Pierre Moio, one of his clients—hooks up prospective pet owners with thousands of shelter cats and dogs in need of a forever home.

Named after Burton’s own rescued kitten, the app functions exactly like Tinder and the many apps that have copied its now familiar user interface; users are shown pictures of a potential pet giving its best “adopt me” eyes. Accompanying the images is a blurb about the animal—personalty traits, medical history, temperament, etc. When you see a pet that would make a good fit for your home, swipe right.

Since the pups and kittens on the other end of the equation aren’t sitting in their cages swiping through people and homes where they’d like to live, the app instead saves all the picks for the person and organizes them by distance so the user can go track down their new furry friend.

The app is primarily made for shelters, but the occasional private user might post after an accidental litter or if there’s an upcoming move that the family pet can’t make. The focus is entirely on helping pets who have been otherwise abandoned get the opportunity they deserve to find a home.

Zeppee isn’t the first app to utilize the Tinder approach to connections for pets: BarkBuddy, a product of the makers of the dog-centric subscription box BarkBox, similarly matches up people with pups. Other apps like Zoa also offer similar services. And once you’ve adopted a new pal, you can set up playdates on Tindog or Bark ‘N’ Borrow.

No matter which app you choose to do your next search for a new companion, it’ll be easier than trying to find an actual pet on Tinder. Good luck ever swiping left, though.