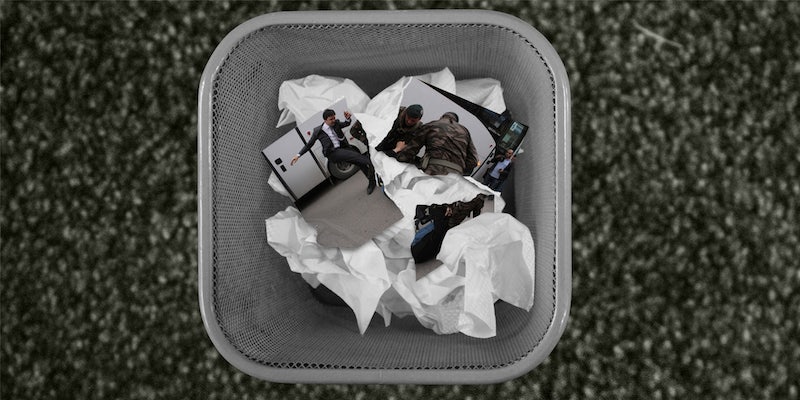 This is one way to try to salvage your reputation.

In May of 2014, Yusuf Yerkel, a senior Turkish government advisor, injured his leg. He’d been kicking a man protesting the prime minister’s response to the worst the worst mining accident in the country’s history. To Yerkel’s embarrassment, the moment was caught by a Reuters photographer, meaning the entire world got the chance to witness that moment.

For more than two years, Turkish government officials have made extensive use of a powerful legal tool to censor online content. But few have taken advantage like Yerkel, an advisor to then-Prime Minister Recep Tayyip Erdo?an.

That Yerkel even had such a legal option at his disposal is thanks to Turkey’s decision, in the wake of a corruption scandal surrounding Erdo?an, to amend its Internet Law (Art.9), to allow censoring of online content that constitutes defamation. The legal procedure is so expedited that judges can give ban orders within a day, with no hearing, no entitled right of defense for the accused. ISPs are ordered to block the online content within four hours of a judge’s decision.

The law has become Turkish government officials’ go-to tool for censoring the Internet: More than 4,000 orders were issued by Turkish courts over the last two years, banning about 25.000 URLs. The bulk of these banned addresses are Twitter and Facebook posts, YouTube videos, and news articles. According to the data collected by cyber law professor Yaman Akdeniz, Erdo?an, now the country’s president, and Ahmet Davuto?lu, who succeeded him as prime minister, lead the censorship requests.

Yerkel injured his his leg while visiting the town of Merkel, which was openly mourning the 301 miners who died in an accident at the coal mine in Soma, Turkey. The town was already on edge; it was inflamed when Erdo?an downplayed the disaster by comparing it with mining accidents in 19th-century Britain.

As he left the press conference at the town hall, an angry mob booed Erdo?an and called him to resign. Erdo?an, furious, took it personally: Amateur videos shows him assaulting a protester with his guards; Yerkel’s contribution was to kick a deceased miner’s relative. The photos of the assault, taken by a Reuters photographer Mehmet Emin Al, went viral as the Turkish state official’s response to mourners in Soma.

Yerkel minced no words when describing his sense of the incident. “I am sad I was not able to maintain my composure despite all the provocations, the insults and attacks to which I was exposed,” he said in a statement to the press the next day.

Public outcry persisted, and Erdo?an claimed in a statement that Yerkel had been dismissed from his duty. This was untrue, since the “duty” referred in the statement did not officially exist, and the administrative inquiry for him has never been carried out. Yerkel currently still occupies the same position in Prime Minister Davuto?lu’s office.

But that wasn’t enough. After the incident, Yerkel hired a law firm with experience in online reputation management. In December, long after the photo and story had gone viral, he submitted that list of URLs to a Turkish court, claiming defamation. Hours later, the court ordered the country’s ISP ban each of those 357 URLs. Sites unrelated to Yerkel’s kick, including news articles published a year before the mining disaster, were included.

So were news articles from almost all of Turkey’s national news outlets, as well as international ones like Fox News, Yahoo, Huffington Post, the U.K.’s Daily Mail and The Times, and Germany’s Spiegel. Notably, some of the banned articles are from pro-government outlets, which portrayed Yerkel’s kick as a justified act of self-defense.

There’s one common element among the banned coverage of Yerkel’s kicking: the visuals. Evidently, Yerkel’s online reputation management company made an image search of his name on Google, and listed the URL addresses that host the images and videos of him kicking a mourner, regardless of the defamation claim.

Yerkel is far from the only Turkish official to use this amendment for personal reasons. Former Communication Minister Lütfi Elvan made use by forcing Twitter to withhold tweets calling him an “idiot.” That fact that some of these he singled out were never retweeted, and that most of the accounts had a very small number of followers, didn’t matter. By all appearances, Elvan, or his aides simply searched his name on Twitter and submitted a list of 63 tweets that they wanted censored to the court.

Photos via Reuters and Jerry Nihen/Flickr (CC BY 2.0) | Remix by Jason Reed