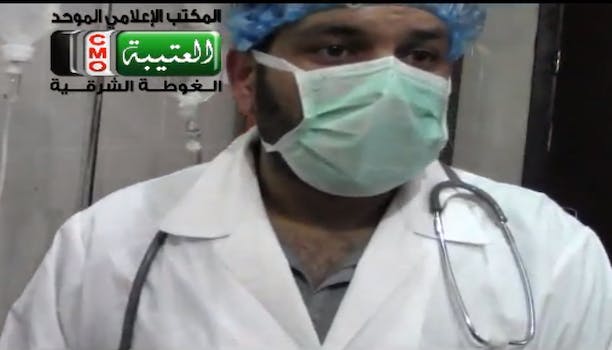 Could this footage be evidence against the Syrian president?

Four videos uploaded to YouTube in mid-March may help confirm the theory that Syrian President Bashar al-Assad is using chemical weapons against civilians.

The New York Times Lede blog posted the aforementioned footage on Thursday, the same day that the White House sent identical letters to Sens. John McCain and Carl Levin confirming that the administration had “varying degrees of confidence” that the Assad regime was using the chemical sarin to combat rebel forces intent on removing him from power.

Exposure to sarin, a nerve agent “500 times more toxic than cyanide,” can result in loss of control of bodily functions and involuntary twitching, eventually leading to a coma and suffocation.

The videos in question—posted by an account associated with the Syrian rebels—document various men being treated for these very symptoms at a clinic after an alleged March 19 attack on the town of Ateibeh, just outside of Damascus.

“Missiles came and they exploded, and they discharged something like water, but it was dark,” an unidentified man explains in the first video, according to the New York Time‘s Arabic translation. “It emitted a very foul smell.”

“A new massacre of civilians has been committed in the town of Ateibeh during a chemical strike on the town,” reiterates the camera man in the followup footage, which begins with disturbing images of a young and unresponsive man with discolored skin.

The third video is equally shocking. In it, a doctor inserts a tube inside the nostril of a convulsing victim, perhaps so as to prevent suffocation.

In the fourth and final clip of the batch, the videographer interviews a doctor in the clinic about his patients, their symptoms, and what he’s doing them to treat them. The latter laments and states that the majority of the victims being brought to his clinic are already dead, and those that are alive are being treated with atropine, an treatment used to combat symptoms of nerve gas poisoning.

The medical practitioner concludes his interview by making a plea to anyone watching.

“Unfortunately, if the world doesn’t want to stand by us militarily or doesn’t want to help us, the least they can do is send up a few atropine ampoules. We, to be honest, when we get a patient we can use up to 15 atropine ampoules in one hour. And we desperately need atropine. And there is a drug called Obidoxime. If they can provide us with Obidoxime, we don’t want anything else from them, neither weapons nor support. We just want them to help the patients we have here — the patients here that we are losing day after day. They’re all civilians and all children. What are they guilty of, those people? They just want medicine. We don’t want relief efforts. If you’re not capable of just sending us medicine, you will be held accountable by God.”