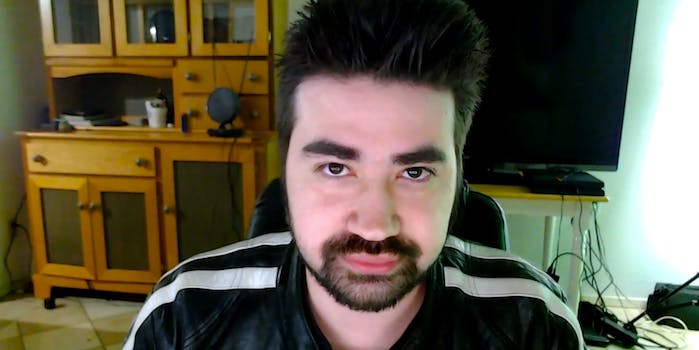 Angry Joe breaks it down for you.

In the wake of what’s being called “Copyritpocalypse,” many prominent YouTubers, mostly in the gaming community, are finding tens and hundreds of their videos flagged, and some of them even removed altogether. Most of the channels flagged so far appear to be affiliates of multi-channel networks (MCNs), but in this case, MCNs are standing with their content creators.

Joe Vargas of AngryJoeShow is just the latest target of these copyright claims. After having 62 of his videos flagged (some of which happen to be his most popular), he put his current issues with YouTube on display for his 1.1 million subscribers. To say that he is angry about the copyright claims is an understatement.

Some of the videos have been muted for using audio that matches copyrighted material, while other videos have been blocked entirely. But as a game reviewer, Angry Joe argues that he’s covered under Section 107 of U.S. Copyright Law, which covers fair use. He’s offering criticism about the games (as well as advertising them to his subscribers). Content creators who make Let’s Play and Walkthrough videos that use game footage have argued they also fall under fair use for commentary.

And despite the millions of dollars that Joe and thousands of other creators have made YouTube over the years, he feels that the company doesn’t have his back at all. He says YouTube hasn’t respond to any of his attempts to dispute the claims.

“They don’t want to deal with it, yet they love making millions of dollars off of it and splitting the revenue with you,” Vargas said.

Now that @youtube has earned sufficient money from my content in the past. Fuck me right? Cuz a few assholes who upload full movies & songs?

Im so mad right now that I cant even rant i cant even film anything without a pure non stop string of profanity and frustration.

Luckily for the affiliates affected by Copyritpocalypse, MCNs have spoken out in support of their content creators. It doesn’t look like either gaming companies or MCNs saw this coming.

Game developer Deep Silver tweeted out a statement explaining that it would support YouTubers’ right to review and commentate on its games, no matter what opinion they had, while Capcom and Machinima told followers that they would be investigating the situation.

YouTubers: Pls let us know if you’ve had videos flagged today. These may be illegitimate flags not instigated by us. We are investigating.

Despite YouTube’s mostly-positive spin on the past year, it’s been an ongoing battle between the company and its content creators—most notably with the forced integration of Google+, which many users have publicly spoken out against. When asked for comment, YouTube merely confirmed that Content ID had scanned videos.

“We recently enabled Content ID scanning on channels identified as affiliates of [Multi Channel Networks],” a YouTube representative told GameSpot. “This has resulted in new copyright claims for some users, based on policies set by the relevant content owners. As ever, channel owners can easily dispute Content ID claims if they believe those claims are invalid.”