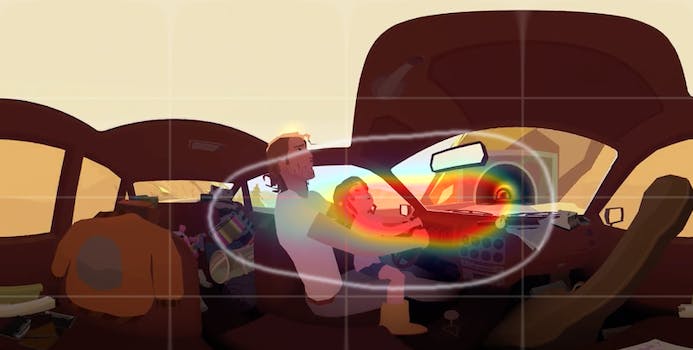 It's not available for everybody.

YouTube will allow creators of 360-degree video to see which parts of the visual field their viewers’ eyes are tracking, according to a post on the company’s official Creator Blog. It’s part of a set of new analytics the company is releasing to help improve the toolset for makers of 360-degree, virtual reality videos.

The basic idea is pretty simple: YouTubers who produce 360-degree videos will be able to view them with a heat map visual overlay, showing on a hot/cold color scale which parts of the video are holding viewers’ attentions and for how long. YouTube’s heat map is far from the first time such technology has been used to try to improve virtual reality video-making, but it is the first time this tool will be native to YouTube.

According to the blog, however, it’ll only be available for videos with more than 1,000 views, meaning it’ll likely be restricted to people with at least a modest following.

This may help creators of intensive and inventive 360-degree videos learn which areas of the screen most easily grab and hold people’s attentions, as well as what kinds of visuals are most stimulating and engrossing. The most immersive way to watch a 360-degree video is undoubtedly with a VR headset, but people who lack those devices can still look around videos while watching on their web browsers.

In short, YouTube seems intent on boosting up 360-degree video as the next big thing, both through new tools and new initiatives. The company is also now taking applications for its VR Creator Lab, a three-month program kicking off in August that will award a handful of creators to workshop with VR experts, as well as between $30,000-$40,000 to finance their productions. Creators who meet the prerequisites―having uploaded at least two 360-degree videos, having at least 10,000 followers, and being over the age of 18 among them―can submit an application with the window to apply closing on June 21.