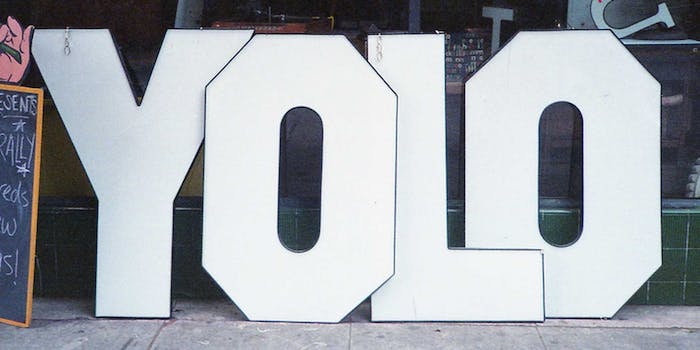 The people behind Yo are mad that someone copied an idea that was never good to begin with.

Yo is a joke. It’s an app that does practically nothing, aside from sending a two-letter message to someone you know. There’s really nothing about the app that makes it unique—aside from the fact that it was originally an April Fools gag—but now Yo’s creators are trying to get a bunch of similar apps yanked from the App Store.

The developer of an app called Yolo, which is a near perfect Yo clone, has received a takedown notice from Apple, stating that Yo believes Yolo is infringing on its intellectual property rights. Similar notices have been received by the makers of other Yo parody apps including the Game of Thrones themed “Hodor!” app, which has since been removed from the App Store.

Yes, an app company whose product does nothing but send a single word is attacking other apps that send their own, different words, because they feel it is “a complete fake copy” of their app.

A fake copy? Of what? Yo sends two letters, Yolo sends four. Technically speaking, Yolo is actually a more feature-rich experience than the “real” app, as it is capable of sending a message twice as long.

If Yo wants to talk about reasons why an app shouldn’t be allowed on the App Store, perhaps the company could address the fact that every smartphone on the face of the earth is capable of sending the word “Yo” to another person without the need for an app. Yo is pointless and redundant, but if it is allowed to exist, its copies should be allowed to thrive as well.

Let’s all keep in mind that, despite the fact that Yo is getting all serious in its attacks on the “clones,” the app itself was designed to be a joke. Yo’s own creators seems to have forgotten that entirely (perhaps that mind-boggling investment erased their memories), and the more they try to defend the app as some sort of novel, artistic approach to communication, the more foolish the company—and by extension, the app—looks.