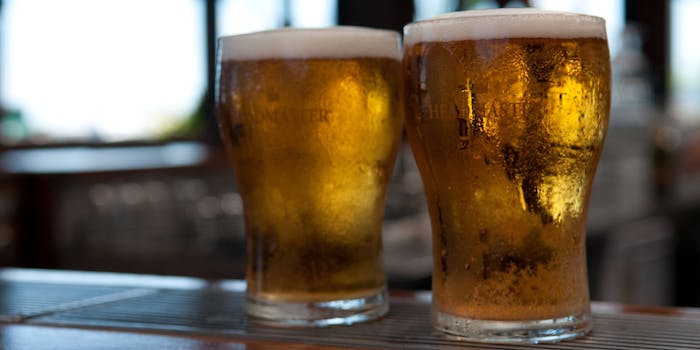 Yo—the app capable of sending just one word to the recipients of your choosing—has waged a war against the apps that attempted to duplicate its undeniably thin gimmick. If the company plans to continue that fight, it might find itself in a bar-clearing brawl thanks to Beer!?, an app of equal usefulness, or lack thereof.

Like Yo, Beer!? sends its titular word to whoever you choose. In this case, it’s designed to organize impromptu happy hour get-togethers and random bar visits with friends, despite the fact that you can’t use the app to discuss a time or location for the actual drinking to take place.

In short, there’s really no reason for it to exist if you have a phone capable of sending text messages already, but I’ll admit that it has a strange appeal that isn’t easily explained away. The fact that an app would exist solely for the purpose of guilting a friend into meeting you for a few drinks makes it feel like a good idea even if it really isn’t.

It’s that simple allure that lies at the core of a new app trend: single-purpose apps. Yo and its single-word-messaging clones might be silly, but they point to a larger shift that has even sucked in companies like Facebook and Foursquare. It’s all about the somewhat counterintuitive idea that more apps is actually simpler (or maybe just… better?) for the end user.

Facebook’s recent decision to force its users to download the dedicated Messenger app for chat, rather than allowing them to converse using the standard app, was met with disdain. The company insisted the change was for the best and that the experience would be better, and once user animosity—which, by the way, is still simmering in user reviews and comments sections—wears off, divorcing the messaging platform from the rest of the Facebook mobile experience will likely be seen as the small tweak that it actually is, rather than the world-ending abomination it’s being made out to be.

Foursquare attempted something similar by slicing off the “check-in” portion of its popular location app into a standalone download called Swarm. The move is designed to revitalize Foursquare’s user base and, as CEO Dennis Crowley suggested in an interview earlier this year, to simplify things.

“We believe the best apps out there are the ones with a single-case use that can be described in a sentence or tweet,” Crowley said. Foursquare’s two apps now fit squarely within that ideal, and the trend shows no signs of stopping amongst developers small or large.

Yes, we’ll always have camera apps with a million options and health apps that attempt to track and quantify every aspect of your life, but all-encompassing experiences will increasingly be the exception rather than the rule. We’ve moved out of the age of do-it-all apps and have stepped firmly into a time where being “an app” means doing one thing, and doing it very well.