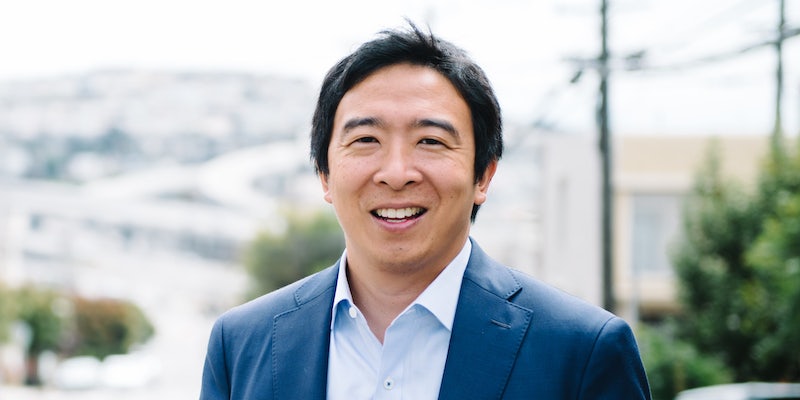 In his closing remarks at last night’s Democratic presidential debate, Andrew Yang shattered the fourth wall when he called out the absurdity of modern campaigns. The daring move appears to have been inspired by his Reddit Ask Me Anything.

Yang began by lambasting “talking heads” for focusing on his lack of a necktie in the first debate rather than the substance of his performance and policies, the fact that he was ranked fourth in national polls, or the four million jobs that the United States has lost to automation in recent years.

Instead of focusing on these and other important issues, he said, “We’re up here with makeup on our faces and our rehearsed attack lines playing roles in this reality TV show. It’s one reason why we elected a reality TV star as our president.”

Since the infancy of Yang’s campaign, the entrepreneur techie has leveraged technology and the internet to attract supporters, raise funds, and get the word out about his policy proposals, such as universal basic income, which would guarantee $1,000/month for every American adult.

On Twitter, #YangGang trended during both debates. On Reddit, his dedicated following phone banks, raises funds, and potentially helps Yang craft talking points for the debate.

Yang appears to have an active Reddit account, AndrewyangUBI. (The campaign did not immediately respond to the Daily Dot’s request to confirm its authenticity. The Reddit profile is not linked on Yang’s campaign website or other social media accounts.)

But the AndrewyangUBI account has been quite busy in the year since it was created, responding to policy and position questions about serious subjects like election security, blockchain, and climate change; and at times making lighthearted statements like, “I will bring 1,000 different dogs to the White House every given month. It will be called the Canine Dividend. It will bring about a new era of abundance of fur and smiles and good boys. :),” which we can only hope is 100% serious.

On July 24, AndrewyangUBI did an AMA on the wildly popular subreddit YangforPresidentHQ (38.3K users and climbing fast).

Redditor onlyartist6 asked Yang if he was “willing to break the 4th wall on the debate stage,” saying the debate was obviously “all political theatre.”

“Could you make known the absurdity of selecting the president of the most powerful nation on earth, through what is basically a reality show contest,” onlyartist6 continued. “If possible, you could tell the audience to research into your policy proposals by citing yang2020.com/policies.”

“Thank you for the suggestion. I like this idea and will take it very seriously. The 4th wall reminds me of pro wrestling. :),” AndrewyangUBI replied.

The question was inspired by a fantasy speech that redditor dead-sparrow wrote for Yang.

“Unfortunately, this is what our politics have devolved into—this political theater. And this is why a reality TV show host occupies the Oval Office,” dead-sparrow’s speech read in part.

In addition to the fact that he broke the fourth wall, it’s hard not to see the similarity between this and Yang’s actual statement at the debate: “We’re up here with makeup on our faces and our rehearsed attack lines playing roles in this reality TV show. It’s one reason why we elected a reality TV star as our president.”

Then there’s onlyartist6’s suggestion, “If possible, you could tell the audience to research into your policy proposals by citing yang2020.com/policies.”

At the end of Yang’s closing remarks, he said, “If you care more about your family and your kids than my neck wear, enter your ZIP code at yang2020.com and see what $1,000 a month would mean to your community.”

“I have done the math; it’s not left, it’s not right, it’s forward. And that is how we’re going to beat Donald Trump in 2020,” he concluded.

“For the first time in history, a Reddit AMA interaction directly influenced what a presidential candidate said in a national debate. It feels like we’re in the front lines of a new era,” a redditor posted on YangforPresidentHQ shortly after the debate concluded.

Others jumped on the AMA thread to congratulate dead-sparrow and onlyartist6.

“You basically were responsible for what was one of the best closing statements I’ve ever heard. Well done!” wrote one. “Wow. Super cool to see him use stuff that his supporters post. Feels like the Yang Gang really is helping him get there!” another said.

We’ve done the math and it looks like Reddit is factoring into Yang’s campaign in a big way.