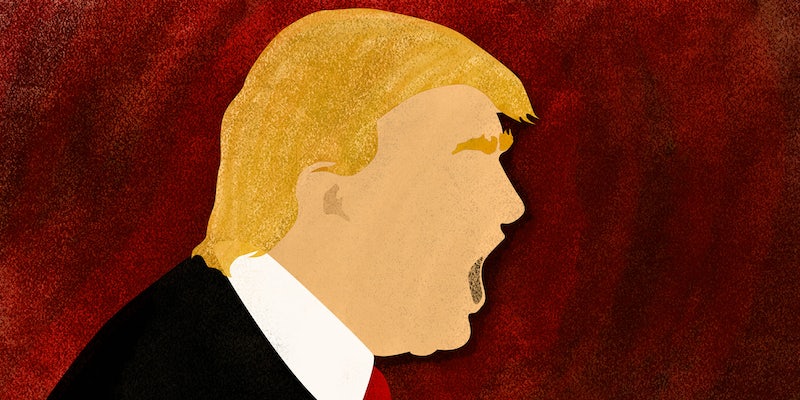 This is not disconcerting at all.

A Yale psychiatry professor spoke to members of Congress about President Donald Trump‘s mental fitness for office, as stories this week have swirled about Trump, his mental capacity, and his possession of the United States nuclear codes.

According to Politico, Dr. Bandy X. Lee, an assistant clinical professor at Yale testified in private briefings to approximately a dozen lawmakers, issuing a dire warning about Trump.

“He’s going to unravel, and we are seeing the signs.”

Speaking to Politico, she cited concerns that the public was fully capable of seeing for themselves, including “denying things he has admitted before” and “being drawn to violent videos.”

Trump’s mental fitness has been a constant theme underpinning his actions in office in his first year, but it was thrust to the forefront again this week when Trump, Tuesday night, got into a nuclear-button-size comparison contest with the leader of North Korea.

Earlier in the year, Sen. Bob Corker held a hearing on the president’s authority to conduct a nuclear strike, and Politico reports that lawmakers and conservative thought leaders, concerned about Trump being in charge of the country’s launch codes, are contemplating how the 25th Amendment could be used to remove Trump from office.

Most of @POTUS's craziness seems so far to have been confined to speech not deeds. But I trust @VP has asked his Counsel to prepare a draft document transferring power in accord with Sec. 4 of 25th Amendment in case it's suddenly needed, & that he's discussed this with COS Kelly.

The Politico report also comes on the heels of an article in the Atlantic by James Hamblin, very dramatically titled “Is Something Neurologically Wrong With Donald Trump?“

The writer spoke to mental health professionals and psychiatrists for over a year about the president, concluding that “there should be a role for professional evaluation [of the president] beyond speculating from afar.”

Hamblin focused on Trump’s motor skills, including his infamous two-handed sip of water, describing it as an “abnormality.”

[In] December, speaking about his national-security plan in Washington, D.C., Trump reached under his podium and grabbed a glass with both hands. This time he kept them on the glass the entire time he drank, and as he put the glass down. This drew even more attention. The gesture was like that of an extremely cold person cradling a mug of cocoa. Some viewers likened him to a child just learning to handle a cup.

The article takes pains to not specifically call Trump out as suffering from cognitive decline, but dances around the matter, comparing him to President Ronald Reagan, who likely suffered from Alzheimer’s while in office. The article concludes that it would be prudent for an advisory committee on the president’s fitness to be established.

[A] Presidential-fitness committee—of the sort that Carter and others propose, consisting of nonpartisan medical and psychological experts—could exist in a capacity similar to the Congressional Budget Office. It could regularly assess the president’s neurologic status and give a battery of cognitive tests to assess judgment, recall, decision-making, attention—the sorts of tests that might help a school system assess whether a child is suited to a particular grade level or classroom—and make the results available.

The committee wouldn’t have the ability to remove the president from office, but merely make recommendations on his cognitive state.

Meanwhile, as Washington is roiling over excerpts from Michael Wolff’s Fire and Fury tell-all, Wolff took to the Hollywood Reporter to talk about his experience reporting the book, noting that West Wing staffers noticed how frequently Trump repeated himself.

Everybody was painfully aware of the increasing pace of his repetitions. It used to be inside of 30 minutes he’d repeat, word-for-word and expression-for-expression, the same three stories — now it was within 10 minutes. Indeed, many of his tweets were the product of his repetitions — he just couldn’t stop saying something.

Trump, for his part, declared instead that one of his former closest confidantes was the crazy one.