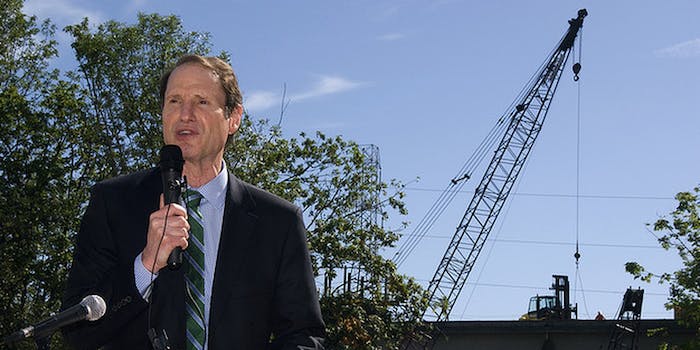 The Intelligence Oversight and Surveillance Reform Bill was introduced by Wyden in conjunction with Mark Udall (D-Colo.), Richard Blumenthal (D-Conn.) and Rand Paul (R-Ky.). It would prohibit the bulk collection of Americans’ records, shield Americans from warrantless searches of their communications, and install a constitutional advocate to argue significant cases before the secret Foreign Intelligence Surveillance Court (FISC).

“The overbroad surveillance activities that have come to light over the last few months have shown how wide the gap between upholding the constitutional liberties of American citizens and protecting national security has become,” Wyden said in a statement accompanying the bill.

“The effect can be felt not only by the significant erosion of civil liberties domestically, but in the reduced credibility of the American government abroad and the significant impact on American economic interests. These reforms seek to close that gap and avoid the false choice of protecting security over the preservation of personal liberty.”

Specifically, the bill, while still allowing the government to gain access to individual records related to those suspected of terrorism or espionage, will prohibit the bulk collection of citizens’ records.

It also seeks to reform the FISC, creating the position of an Constitutional Advocate (CA) to argue against the government in significant cases. The court currently operates completely without oversight and “makes judgments on important constitutional protections based solely on arguments made by the government.” The CA will “present an opposing view in cases where the FISC is called upon to interpret US surveillance laws or the Constitution.”

The bill will establish a process for making certain significant rulings public and will prohibit “backdoor searches,” a loophole that permits the government to spy on Americans, otherwise against the law for intelligence agencies to do, whenever it can be said to be accidental or incidental to surveillance of foreign targets and make it impossible to collect information about a subject (as opposed to communications to or from the subject).

It took the continued revelations of NSA spying by Edward Snowden to force the issue of surveillance for legislators. There have been over a dozen legislative initiatives since the Guardian, the Washington Post, and Der Spiegel have started publishing stories based on Snowden’s leaks. This bill dovetails many of those efforts.

That the worm has turned is by no means certain. In July, a measure to end the NSA’s bulk collection of millions of Americans’ phone records went down by only 12 votes.The heads of U.S. intelligence agencies, Gen. Keith Alexander, and the director of national intelligence, James Clapper among them, have already begun to militate against the bill.

“The fact that the President and Senate Intelligence Committee are even talking about making changes to domestic surveillance laws and the secret surveillance court shows there’s growing momentum for making the major reforms that are badly needed,” Wyden told the Daily Dot.

“Combined with the strong support in the House of Representatives and the growing groundswell of public opinion, it’s a good recipe for achieving reforms that are meaningful and not just cosmetic.”