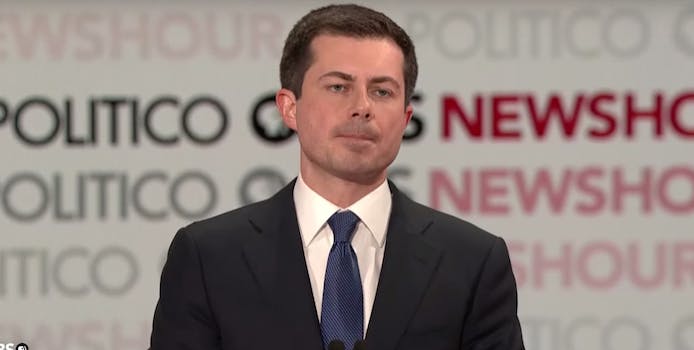 Won't someone please stand up for the metaphor?

One of the feistiest moments of Thursday night’s Democratic debate came when Sen. Elizabeth Warren (D-Mass.) went after Mayor Pete Buttigieg over a recent fundraiser he held at the winery of a billionaire.

The exchange sprawled into a genuinely interesting back-and-forth (perhaps the only interesting moment last night) about the current state of money in politics, Democratic donors, the influence of billionaires, and what it means for a campaign to be progressive and grassroots.

Buttigieg tried to explain that he was the only person onstage with a relatively small net worth—and got extremely upset over what he believed were unfair purity tests he was being held to—while Sanders ticked off the number of billionaires who’d donated to both Buttigieg and Biden, calling them beholden to the interests of wealthy donors.

One thing that doesn’t matter is the feelings of the literal wine cave in which the Buttigieg fundraiser was held. Although that led to Warren’s memorable line, “Billionaires in wine caves should not pick the next president of the United States,” it is an inanimate object.

You, a normal person, understand that the wine cave is simply the medium. The message here is the money.

Unfortunately, some felt the need to log on to defend the honor of wine caves.

California Gov. Gavin Newsom was offended: “It’s how I started. It’s a point of pride, it’s one of America’s great exports.”

“Having a wine cave— it’s my business. It’s how I started. It’s a point of pride, it’s one of America’s great exports…I don’t know that it’s helpful to have those kinds of debates.”

Billionaires also own homes. No one here is challenging the necessity of homes, but Mother Jones’ Clara Jeffries pointed out that they deserve our support.

“[W]ine caves are a big part of regional agriculture… Do you drink wine? It’s been in a cave,” she tweeted.

I feel I must point out that, crysta chandeliers and $900 bottles of wine aside, wine caves are a big part of regional agriculture. They are everywhere. Do you drink wine? It’s been in a cave.

Have you been to a silo? A wine cave is basically a silo for wine.

Also I’d bet a lot of money that Klobuchar has been to one but anyway.

Here is a "wine cave," every vineyard has one. Many/most use them for event spaces/part of their tasting rooms. It's one of the ways for a farming community under enormous pressure to get by. So anyway, diss the fundraiser if you like, but leave wine caves alone. pic.twitter.com/HUHogRVpm3

Wine Caves are an important part of wine country agriculture. They are not bad places.

This is an important take. Wine caves, big donors aside, are beautiful things indeed. 🍷 https://t.co/AXJtpQpW3I

The wine cave, again, is an inanimate object.