Snapchat at odds with Windows Phone—and a fuming user base

Snapchat has not had the best relationship with Windows Phone users.

To get a sense of the ire and bitterness, let’s take a look at the two companies’ troubled, interpersonal history.

For the uninitiated, Snapchat is a photo-sharing app with a clever twist. Once you send an image to a friend, the image will self-destruct after a few seconds. It sounds silly, but knowing that your image will cease to exist in a couple of seconds allows users to be more open because there’s no chance an embarrassing photo could end up online. At least that’s how Snapchat would like to keep it.

Let’s go all the way back to the app’s launch in September of 2011. Shortly after its launch, Windows Phone users started messaging and tweeting Snapchat about whether or not the app would be making a leap from iOS. Snapchat did reply to some tweets, claiming that it was in talks with Microsoft. 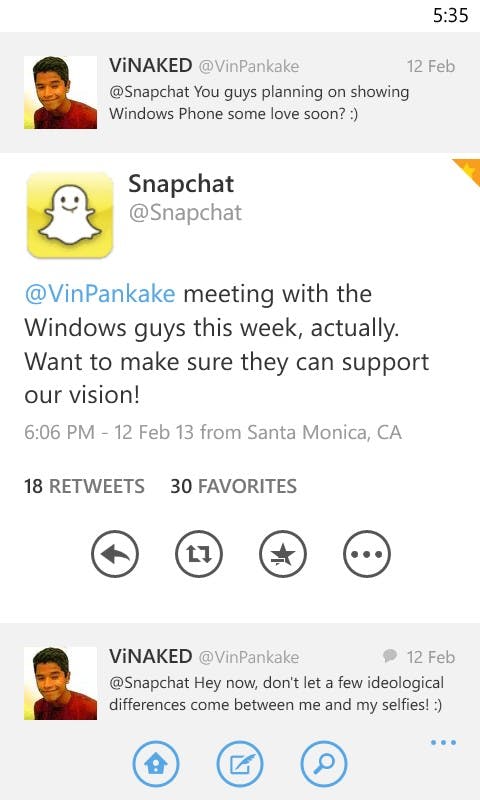 This brought much relief to Windows Phone users as they felt photo-sharing salvation was just across the horizon.

Snapchat then released a survey on Google Docs in April 2013 letting users pick where they would like to see Snapchat next. Survey participants could choose between Blackberry, Android, or Windows Phone. It seemed that Android received overwhelming support, and shortly after an Android version of the app was released in July of 2013.

Even now, on Snapchat’s website, users can vote on where they would like to see Snapchat next.

Other rumors started to surface that Snapchat would make its official debut that summer. It was rumored to be a partnership between Nokia and Snapchat, a co-development that would have brought the app to Nokia Lumia phones. Summer came and went, and there still was not a Snapchat app to be found. Many assumed that it had been delayed, but really it appeared that the app had ceased development.

Sadly, Swapchat was removed from the store because it lacked some essential features required from Microsoft to be available on its marketplace. But there was hope yet again, as the same developer started beta testing SwapBack, a new app that would fix the errors found in Swapchat.

It was overshadowed, however, by 6snap.

Rudy Huyn is a Windows Phone app developer who’s made quite a few apps for the platform. Before there was an official Instagram or Vine app, Rudy was there to provide excellent alternatives. Even now, his version of Instagram, 6tag, is much better than the official one. He’s such a good developer that Google offered him a job.

He first teased 6tag in November 2013, which sent Windows Phone fans into a frenzy.

Later that month, Huyn did finally release 6snap. It was beautifully designed. It worked. Windows Phone users were satisfied at long last. Sailing was smooth for almost a year, and Windows Phone users clung to 6snap. But October brought about Snapchat’s worst fear, a data breach dubbed “The Snappening.” It was a massive breach that compromised the photos of thousands of users, accumulating to over 13 GBs in photos.

The culprit seemed to be the website SnapSaved. It allowed users to route their Snapchat account through its website, giving the ability to save snaps. What was unknown was that the website was also archiving those photos. We’re not entirely sure why, however, but hackers found their way to it and started releasing tons of photos online. Some were explicit, and did feature minors. It’s not totally surprising, considering that half of Snapchat’s user base is between the ages of 13 and 17.

The Snappening also left 6snap users petrified. This breach could change Snapchat’s attitude toward third-party applications. Those fears were justified, as Snapchat wrote in an official blog post that “starting today, we will notify Snapchatters when we have detected that they may be using third-party apps and we’ll ask those Snapchatters to change their password and stop using unauthorized apps.”

Huyn was quick to reassure users on /r/windowsphone that 6snap would not be affected.

Unlike various Android versions of Snapchat that let users cheat the system by allowing photo saving, Huyn was much more strict. He rigorously followed Snapchat’s design philosophy, and never allowed for pictures to be saved or security to be compromised.

His reassuring words were short lived, as last month, Snapchat started sending warnings to users who continued to use third-party applications, and even started banning users outright.

Huyn offered to work with Snapchat to find a solution. But just like before, Snapchat’s public relations department was elusive as ever. The company did not reach out to Huyn or anyone else.

Hey @snapchat, are you aware that you block millions of WP users to use your service? #6snap respects ur philosophy&privacy. Let's talk #wp

6snap has disappeared as well as all snapchat apps on store. I will work closely with Microsoft now to convince snapchat to change its mind

This left many users irked, and hung a cloud over the platform’s future. Windows Phone had always played third fiddle to iOS and Android. Many users still preferred it, however, for a variety of reasons, and usually there was a sufficiently decent third-party alternative.

The stonewalling has been a last straw for many—how can Microsoft, a company with immeasurable power and clout, not figure out a way to get major developers to make apps for its platform? As of now, it doesn’t seem likely that Snapchat will be making an official Windows Phone app, to the chagrin of millions.

Perhaps unsurprisingly, Snapchat could not be reached for comment.

Photo via Stuart Heath/Flickr (CC BY 2.0)