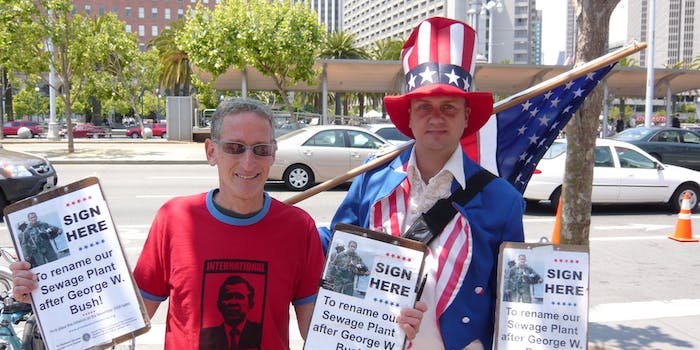 Reddit responds to the response with an idea for a new petition.

Founded in September to bring the age-old act of governmental petitioning online, the White House’s We The People program promised Americans that any petition accruing more than 25,000 public signatures would receive careful consideration from an agency in the federal government. Petitions immediately went up calling for the government to change policies like “Allow Industrial Hempt to be Grown in the U.S. Once Again” and “End the Patriot Act,” but many fell on deaf ears.

On Oct. 28, a petition came forth demanding that the government “[a]ctually take these petitions seriously instead of just using them as an excuse to pretend like [they] are listening.”

“Although the ability to submit petitions directly to the White House is a noble and welcome new feature of the current administration, the first round of responses makes blatantly clear the White House intends to just support its current stances and explain them with responses everyone who has done any research already knows.”

An online petition is not meant as a replacement for using a search box in a web browser. We the People, those who grant you the power to govern in the first place, are requesting changes in policy directly, circumventing legislators who already do not listen to us. We the People request you govern FOR us, which means actually listening to us and actually acting in our interests instead of special interests.

White House special assistant Macon Phillips responded to the petition this week, explaining that the government has heeded the call of all 97 petitions that have crossed the signature threshold:

“We may not agree with the policy views expressed in every petition, and gathering enough signatures to meet the signature threshold does not guarantee that the Administration will change our policy on a specific topic. But in many cases, petitions posted on We the People have helped spur discussions of important policy issues here at the White House and across the Administration, and we’ve used the We the People platform to announce changes in policy or continue a dialogue with people who have an interest in the future.”

On Thursday, the conversation turned to Reddit, where public reaction remained pessimistic.

“I’m still dissatisfied with how the WeThePeople has been run,” wrote redditor Xanatos903. “Most of the responses haven’t actually said anything, and they’ve just been sent to people whose job is to [sic] actually endorse the opposing position.”

“It seems like the only point of these petitions is for the White House to have something to show off whenever one of the petitions happens to align with a policy objective of the administration,” added OctopusBrine. “The rest can be summarily ignored or bs’d.”