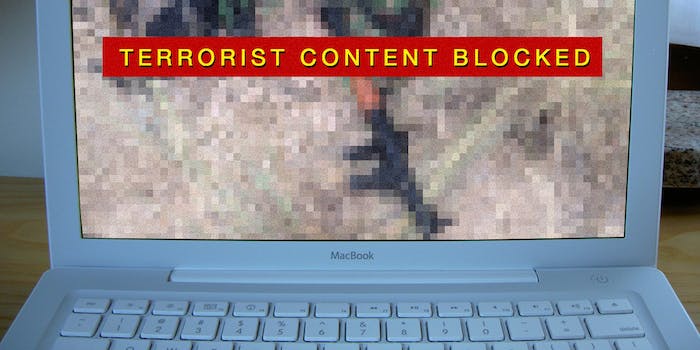 The White House did not reach a major new agreement with Silicon Valley.

The terrorist group ISIS, which calls itself the Islamic State, has proven particularly adept at using social networks to radicalize and recruit new followers, spread word of its military campaigns, and publicize its gruesome executions. Although tech companies already try to delete ISIS accounts and content when they spot it, the White House has grown concerned that they’re not doing enough.

“The Administration is committed to taking every action possible to confront and interdict terrorist activities wherever they may occur, including in cyberspace,” said a senior administration official. “We are using this engagement and others to enlist the help of industry leaders and experts in our effort to ensure we bring the most innovative private and public sector thinking to all aspects of combating terrorism as a whole.”

In a briefing document distributed to meeting participants and obtained by the Intercept, the White House pointed out that it is difficult to track and measure online radicalization and the resonance of extremist messaging.

“Industry certainly has a lot of expertise in measuring resonance in order to see how effective and broad a messaging campaign reaches an audience,” the document read. “A partnership to determine if resonance can be measured for both ISIL and counter-ISIL content in order to guide and improve and more effectively counter the ISIL narrative could be beneficial.”

The administration also cited “a need for more credible positive messaging and content that provides alternatives to young people concerned about many of the grievances ISIL highlights.”

To that end, the administration announced Friday that the federal government was reshuffling its online efforts to combat extremism. A new task force—a joint effort between the Department of Justice and the Department of Homeland Security—will coordinate existing anti-extremism programs, while the State Department program that funds international partners’ online campaigns will be renamed the Global Engagement Center.

“Many of the leading and credible voices that might counter ISIL lack the content-generation and social media prowess that would be required to counter ISIL online,” the briefing document noted.

Through the Global Engagement Center, the administration will “shift away from direct messaging” and focus on “empowering and enabling” those voices in the region, the White House said in a statement.

Obama’s online anti-extremism campaign has faced criticism for its lackluster results, with a Heritage Foundation study finding that the U.S. effort “has fallen short, lacking meaningful attention and resources.”

The issue of the encryption in tech companies’ products also came up at the meeting, but “only very briefly,” a senior administration official said. The White House has faced criticism from tech companies, security engineers, and civil-liberties advocates for not settling an internal dispute among senior officials over whether tech companies should guarantee the government access to encrypted communications.

Experts say that so-called “backdoors” in commercial encryption, which would guarantee the ability of investigators to obtain suspects’ communications with a warrant, would create major security and privacy vulnerabilities. But Comey, who attended Friday’s meeting on the condition that encryption be placed on the agenda, has led the charge for some form of guaranteed access, although he has said that tech companies should come up with the details.

“We are interested in exploring all options with you for how to deal with the growing threat of terrorists and other malicious actors using technology, including encrypted technology, to threaten our national security and public safety,” the administration said in its briefing document.