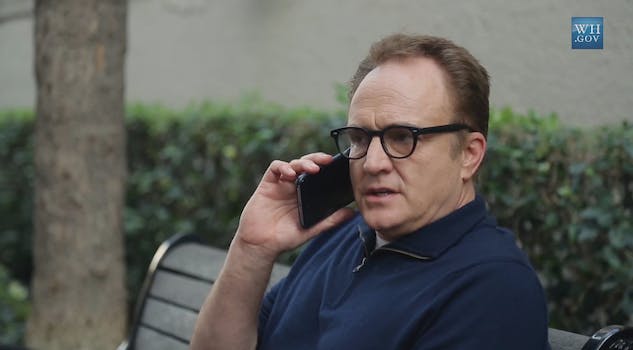 Regardless of your politics, the promotional video is hilarious.

President Obama‘s senior staff are bringing back the White House‘s online citizen engagement day, and they’re calling in their TV counterparts to help.

On Friday morning, the administration announced the return of Big Block of Cheese Day with a promotional video featuring the stars of NBC‘s political drama series The West Wing, which ran from 1999 to 2006 and galvanized new popular interest in the inner workings of America’s most famous office.

Before we can learn when and how the day-long series of Q&As with senior White House staff will happen, we (and White House Press Secretary Josh Earnest) are treated to a series of brie-lliant cheese puns from West Wing stars Bradley Whitford, Richard Schiff, Allison Janney, Joshua Malina, Dulé Hill, Mary McCormack, and, of course, President-for-life Martin Sheen.

White House staff will be answering questions submitted with the hashtag #AskTheWH on Twitter, Facebook, Instagram, and Tumblr. Complete details can be found on the White House blog.

“We’ll have senior White House officials online answering questions from anybody that wants to ask,” Earnest tells the group in the video.

“Yeah, but without the weird stuff,” Earnest replies.

At this point, you may be wondering, “Where does the name ‘Big Block of Cheese Day’ come from and why is this TV show involved?” First of all, shame on you for not watching The West Wing. Second of all, the name comes from several episodes of the series in which the White House chief of staff assigned each of his top aides to meet with citizens whose concerns wouldn’t normally be heard.

“Andrew Jackson, in the main foyer of the White House, had a big block of cheese,” Leo McGarry (John Spencer) says in the first episode involving the day. “Jackson wanted the White House to belong to the people, so from time to time he opened his doors to those who wished an audience.”

Now that you’ve watched the new White House video and the first West Wing clip, you really have no excuse not to watch this second West Wing Big Block of Cheese Day scene.

This isn’t the first time the West Wing cast has reunited, either. In 2012, they made a PSA to promote walking. (Remember West Wing writer Aaron Sorkin’s “walk and talks”?) In 2013, they got together to promote a nonpartisan judicial election in Michigan, in which one of the candidates was series star Mary McCormack’s sister. (She won.) And in 2014, of course, they helped the White House promote its first BBoC Day.