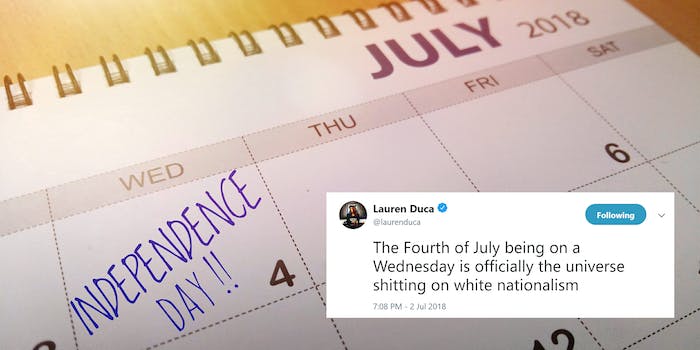 Welcome to the resistance, the slow inexorable passage of time

This is some crazy foresight.

In the nearly two years since he’s been elected, the forces that have combined to oppose President Donald Trump (styled online as the #Resistance) have conscripted some strange as hell bedfellows for their movement: Kim Jong-un, Rex Tillerson, the restaurant Chili’s, and Tiffany Trump.

In fact, it’s become such a ridiculous trope that it’s a well-mocked meme at this point: Welcome to the resistance, impossible entity that could not actually aid in the resistance nor even opposes Trump.

Welcome to the resistance, the Founding Fathers and the slow, inexorable march of time.

The above working theory is that because the Fourth of July is more pleasurable when it falls on a Sunday, Monday, Tuesday, Thursday, Friday or Saturday—because it can lead to the potential for three- or four day-weekends (which everyone enjoys)— because this year’s holiday is on a Wednesday, it is the moral clarity of the universe—as well as the Founding Fathers who had the foresight to pick this specific day 240 years ago—divining a message upon us for our times.

Maybe? Probably not. A lot of people pointed out it was just a coincidence.

They also looped into the fight (perhaps unwillingly?), the Gregorian calendar.

Fucking white people and their…

The Gregorian Calendar is a tool of WHITE GENOCIDE! https://t.co/0imdFC1MIE

The Fourth of July being on a Wednesday is officially a by-product of the Gregorian Calendar https://t.co/EhRlestxzI

But because the nature of time is cyclical, what other times in our life was the Fourth of July on a Wednesday for, thus sending a clear message that the moral aim of America at that time was incorrect?

Well, it fell on a Wednesday in July 1945, when we were unified in a fight against Nazis. In fact, we’d just defeated Germany months earlier. Shouldn’t we have gotten that holiday—that momentous holiday—on a Sunday, or Monday, or Tuesday, or Thursday or Friday, or Saturday?

One would think, unless, and this is just a working theory, the universe loves Nazis, and is upset at America whenever they challenge them.