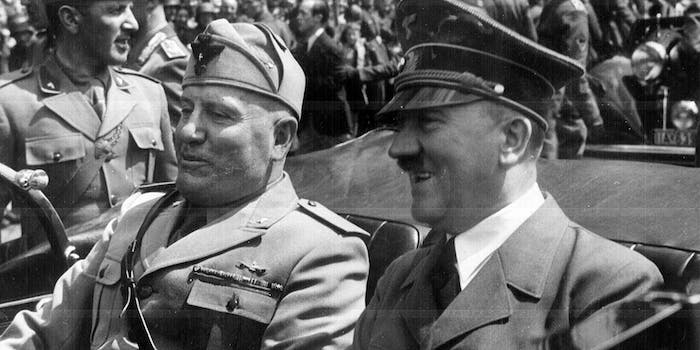 We get it, Hitler was the worst. Find a better analogy.

Godwin’s Law states that the longer online an online discussion goes on, the greater the likelihood that someone will invoke Nazi Germany.

First conceived in the early days of the Internet, the rule still is just as true today as it was when Godwin coined it about the Usenet discussion forums of the 1990s. A recent analysis of the social news site Reddit found that, as posts on the site approach 2,000 comments, nearly half contained a reference to Hitler or Nazis.

There are a whole bunch of possible reasons behind this phenomenon. Maybe the Nazi Party’s effect on the world was so complex that it touched a vast array of topics and using it as a lens of analysis is useful tool in a litany of different contexts. Maybe historical scholarship about World War II is significantly more widespread among the general public than previously thought and the Internet is beset by an army of history buffs looking for any opportunity to show their stuff. Maybe it’s an infinite-monkeys-on-infinite-typewriters situation and it’s just sheer, random chance that the Third Reich always seems to pop up eventually.

Or maybe it’s that, when people don’t like something, they immediately rush to compare it to the worst thing they can think of, which is pretty much always Hitler.

For many American conservatives, the number one thing they don’t like is President Barack Obama. The most recent thing for which they have been criticizing him is his lack of attendance at a massive rally in Paris on Sunday in support of the victims of last week’s string of terror attacks in France. For example, in an op-ed in Time, Sen. Ted Cruz (R-Texas) called Obama’s absence “symbolic of the lack of American leadership on the world stage.”

Not to be outdone, Congressman Randy Weber (R-Texas) proved Godwin’s Law with this tweet, posted the day after the rally: 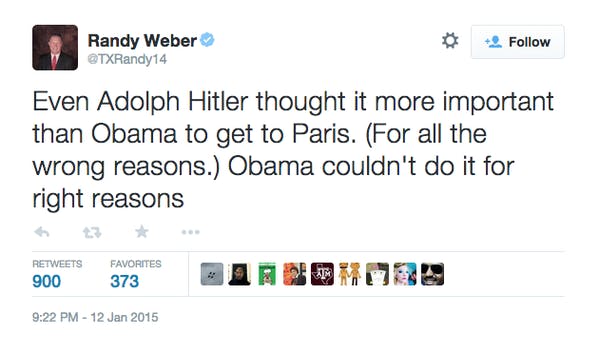 The tweet refers to Adolph Hitler’s visit to Paris after the Nazis occupied France during World War II. You may recognize the reference from a recent Yelp discussion thread about which pizza place in your neighborhood serves the best calzones.

An important corollary to Godwin’s Law is that the person invoking Hitler or the Nazis immediately loses the debate for resorting to needlessly hyperbolic rhetoric when logical rhetoric would probably have sufficed. This particular case is a perfect example.

Weber was clearly looking to score some easy political points at the president’s expense, but he needn’t have bothered. The debate over Obama’s attendance at the rally was one that the commander-in-chief’s critics were handily winning. Conservatives had been joined by liberal icons like The Daily Show’s Jon Stewart, who slammed the administration for its failure to send any top officials (including Attorney General Eric Holder, in Paris at the time for an anti-terror summit) to the event.

Bowing to criticism, White House Press Secretary Josh Earnest admitted that it had been a mistake not to send anyone with a higher profile than America’s ambassador to the rally. The march drew world leaders like U.K. Prime Minister David Cameron, German Chancellor Angela Merkel, and Palestinian President Mahmoud Abbas.

Update 5:47pm ET, Jan. 13: Rep. Randy Weber has since deleted the tweet comparing Obama to Hitler, and he offered the following apology:

“I need to first apologize to all those offended by my tweet. It was not my intention to trivialize the Holocaust nor to compare the President to Adolf Hitler. The mention of Hitler was meant to represent the face of evil that still exists in the world today. I now realize that the use of Hitler invokes pain and emotional trauma for those affected by the atrocities of the Holocaust and victims of anti-Semitism and hate.

“The terrorist attacks in Paris should remind us of the evil that still exists. Hitler was the face of evil, perpetrating genocide against six million Jews and millions of other victims. Today, we are facing the evil of Islamic extremists who are attempting to instill fear and murdering the lives of innocent people from Paris to Nigeria to Jerusalem and all over the world. The President’s actions or lack thereof is my point of contention. Islamic extremists have shown they are not going away, and instead are hungry for more blood.

“After World War II, the world made a commitment to ‘Never Again’ allow terror free reign. As demonstrated by the Paris Peace Rally, we must all –Christians, Jews, Muslims, leaders around the world and those willing to fight for freedom – unite and stand strong together against radical extremism in any form.”