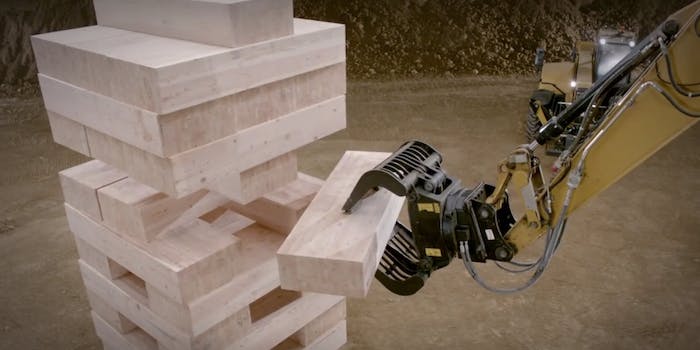 We're hoping Monopoly is next.

It had never occurred to me how Caterpillar Inc. might advertise its ubiquitous yellow construction equipment, but this clever new commercial does a great job of showcasing the mechanic precision that’s made it such a familiar brand. More importantly, however, it’s a video of excavators playing a huge—and enormously suspenseful—game of Jenga.

With 27 blocks that weigh 600 pounds apiece, you really don’t want to be stuck on cleanup duty once this tower topples. Or anywhere underneath it.

Pretty cool, though all the necessary safety precautions likely preclude them from playing according to college rules, i.e., with everyone drunk and loudly trash-talking. Or is that not what everyone did with the best years of their lives?