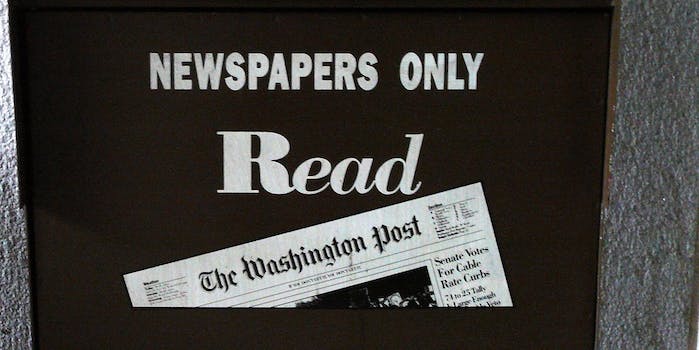 It was a simple mistake, but it sparked an overwhelming backlash.

Conservatives are furious over a tweet from Washington Post reporter Rachel Bade about her and five other co-workers having dinner after a long day of impeachment proceedings.

The tweet wasn’t a controversy political take or statement, just a few coworkers grabbing some dinner after a long day at a local Washington, D.C. pub.

But Bade’s caption to the now-deleted tweet reads, “Merry Impeachmas from the WaPo team!” referring to a popular Twitter hashtag that trended during the day in advance of President Donald Trump being impeached.

Other Washington Post reporters in the photo included: Karoun Demirjian, Seung Min Kim, Paul Kane, and Mike DeBonis, all of whom looked to be enjoying themselves.

Rachael Bade, no one is misinterpreting your Tweet. It speaks for itself. .@WashingtonPost .@RachaelMBade #WaPo Team pic.twitter.com/hrXk5Aahdx

Brad Parscale, Trump’s 2020 campaign manager, took no time to cue up outrage over the dinner, tweeting that the “media needs to stop acting like they are ‘impartial’.”

The outrage, from there, only grew.

Jared Holt, a reporter for Right Wing Watch, pointed out the rage cycle over the use of the slogan, which had been trending on Twitter yesterday.

Some right-wing folks on here are gunning after some WaPo reporters for tweeting "Merry Impeachmas" as if that wasn't trending on Twitter earlier this week and didn't inspire numerous articles already pic.twitter.com/414huxbwcC

White House Press Secretary Stephanie Grisham alleged Holt was “defending” his colleagues in the media, while seemingly getting upset over an off-the-clock dinner of co-workers.

And on cue some reporters will circle the wagons & defend their colleagues at all costs. Calling out reporters for inappropriate behavior is labeled (by the media) an attack on the free press. Reporters claim they “hold the powerful accountable”. But who holds them accountable? https://t.co/UhAvHVNNOI

Grisham also teased that democracy was really going to die over chips and guac, playing off the Washington Post’s slogan of “democracy dies in darkness.”

With the White House and Trump campaign foaming at the mouth, other Trump allies jumped on the friendly holiday gathering and light-hearted tweet.

Milo Yiannopoulos, a far-right provocateur, shared on his Telegram late Thursday a message with what appears to be Bade’s phone number, saying, “If anyone wants to give the Washington Post reporter Rachel Bade a call, her phone number is..”

Dan Bongino, a conservative pundit who was once an InfoWars regular, also took a jab at it.

Because normally reporters Tweet “Merry Impeachmas” when celebrating getting off work for the holidays 🙄 https://t.co/6g5AOmiBCD

As you can see, the press is very very objective and non-partisan. pic.twitter.com/FTpfShIi9H

The Daily Caller also pointed out that two of the reporters were drinking beer. The reporters are all of the legal drinking age.

Bade later took down the tweet and wrote, “I’m deleting a tweeting tonight that is being misinterpreted by some as an endorsement of some kind.”

I’m deleting a tweeting tonight that is being misinterpreted by some as an endorsement of some kind. To be absolutely clear, we at the Post are merely glad we are getting a break for the holidays after a long 3 months. I will retweet the group photo w/ a better caption !

Kristine Coratti Kelly, Vice President of Communications at the Washington Post, told the Daily Dot, “The reporter who sent out this ill-considered tweet was celebrating being off the clock after a long day covering impeachment. She wasn’t celebrating impeachment.”