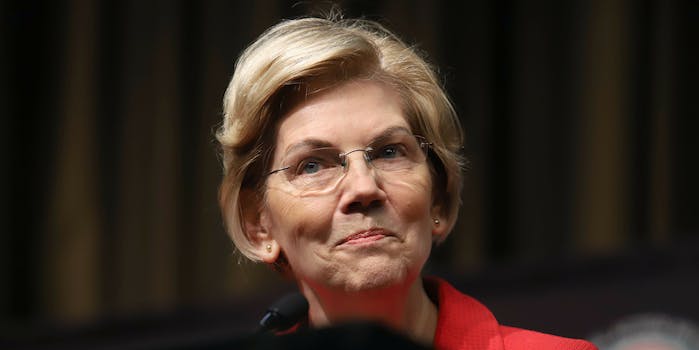 Never underestimate how upset people will be about helping other people.

Student debt has exploded in the past decade, as colleges have become more and more expensive and the interest rates loan companies charge students continue to grow. Collectively, young Americans are saddled with $1.5 trillion in debt, making concepts like owning a home and saving for retirement foreign to them.

What makes less sense is why so many people are against it. In the wake of Warren’s announcement, numerous dudes spoke up in defense of banks, predatory lenders, and keeping America’s institutions of higher learning as white and male as possible.

Warren's desperate pander is understandable — millennials no longer benefit from free college & have a ton of student loans. However, cancelling debt is tremendously unfair to those who paid theirs off https://t.co/4g6No2MRVm

Klein writes that “Warren’s plan to cancel student loan debt would be a slap in the face to all those who struggled to pay off their loans,” as though because some people experienced hardship, we should no longer extend gratitude or relief toward anyone.

That logic didn’t really carry water when applied to other instances, though.

New post: “Allowing women to vote was a slap in the face to all the women who weren’t allowed to vote before" https://t.co/3aXh4PBxdy

New post: "Fixing pothole is a slap in the face to all those who struggled to drive over it." https://t.co/okWx2HZt9x

Like how antibiotics are a slap in the face to all the people who died of plague. https://t.co/gPBmVvnIFf

Klein’s argument was that people who worked to pay off their loans would be angered because the government helped people who were struggling with paying theirs off. Which is a thing governments frequently do.

But it wasn’t just students who paid off their loans who would be upset. Won’t someone think of the banks?

Don’t worry, Ben Shapiro is here to think of the banks.

Do mortgages and credit card debt while we’re preparing to screw lenders https://t.co/xlaasoDYDS

Shapiro worries that alleviating one segment of debt in society might lead to politicians tackling other debts people struggle with, which might adversely affect corporations who make obscene amounts of money off people.

But even young millennials who you might think are sympathetic to the cause are also upset that someone wants to help with the debt crisis. Joel Pavelski, formerly of faking a funeral to build a treehouse fame, announced that he thought maybe poor people just shouldn’t go to some institutions of higher learning.

It’s an interesting thought that would help wealthy families continue their inordinate stranglehold over society while simultaneously preventing disadvantaged people from improving their lot in life.

That's what I tell people who "need" a house. I mean you could just use a dumpster. Sheesh.

I too think our best institutions of higher learning should be the exclusive reserve of the rich. https://t.co/hAd6LbKqMZ

Maybe Warren just wants to help people who struggle with debt for simply wanting an education.