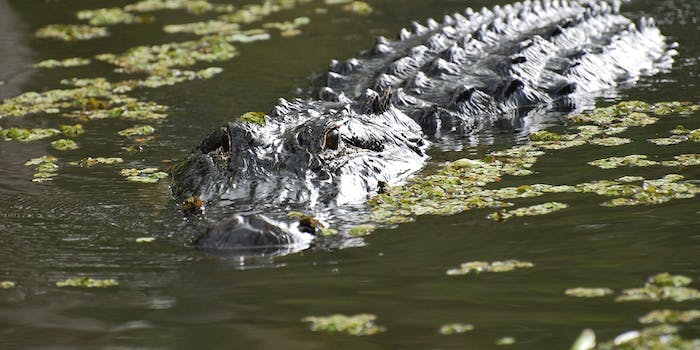 Could an implant have saved the life of the toddler attacked by an alligator?

The future of implants may end up being most useful for the safety it provides.

Among other tragedies in Florida recently gripping America’s attention, a 2-year-old boy was snatched away from its parents by an alligator at Walt Disney World on Wednesday. I have a similar-aged toddler myself, and I followed this heartbreaking story closely. Unfortunately, it ended as horribly as it began, with the recovery of a dead child.

My presidential campaign with the Transhumanist Party is based on advocating for radical science and technology to make the world a better place for humans. As a result, for nearly two years I have been advocating for using chip implants in people to help keep them safer. Chip implants are often just the size of a grain of rice and can be injected by a needle in a nearly pain-free 60-second procedure. The implants can do a multiple array of things depending on the type. And much of the technology has been used in pets for over a decade, so it’s already been shown to be relatively safe.

I have a RFID NFC chip in my hand that is programmed to send a text saying “Win in 2016” to people who have the right type of phone. To get the text, all you have to do is put your phone by my hand. My chip can also start a car with the right software, hand out a business card electronically, or give out my medical information.

But the future of implants—as well as other wearable tech—may end up being most useful for the safety it provides.

We may need to face the facts: We already live in a surveillance society.

While scene reports claim the father got into the water to save his son, perhaps if that 2-year-old at Disney World had been GPS chipped (or tattooed with a graph chip), the parents could have tracked him on their smartphones. And security might have been able to quickly identify his location in the water, perhaps even fast enough to have rescued him. The New York Times reports that the body was tragically found underwater only 10-15 feet from where it was last seen.

That’s of little consolation now, of course, and I don’t mean to be insensitive to the family’s loss, but I do think this tragedy illustrates how implants could help improve public safety. They could help track our children, and adults for that matter, in the case of kidnapping and Amber alerts, or even just when they get lost on a hike in the woods.

An article I wrote last year at the Huffington Post discusses the use of a brain implant that goes one step further than GPS tracking by notifying emergency crews of extreme trauma:

Cranial implants and brain wave technology have come a long way in the last few years. Already, hundreds of thousands of people in the world have microchip implants in their heads, consisting of everything from chips to help Parkinson’s sufferers to cochlear implants for the deaf to devices to assist Alzheimer’s patients with memory loss. For each, this technology allows a better life. DARPA recently announced a $70 million dollar five-year plan to develop implants that can monitor soldier’s mental health. It’s part of President Obama’s new multi-billion dollar BRAIN Initiative.

Implants using Electroencephalography (EEG) technology can read and decipher brain waves. Trauma, however experienced, is a measurable biological phenomenon that can be monitored and captured by an implant device. Scientists must do nothing more than create a trackable chip that sends an emergency signal to nearby authorities when it registers extreme trauma. Help can then arrive quickly to the victim.

Much of the the technology for such a device basically already exists. And such a device could be useful for far more than rape or criminal violence, too. Drowning, being burned in a fire, automobile accidents, building collapses, snake bites, kidnappings, bullet wounds, senior citizens who’ve fallen down stairs and can’t get up—the list of terrible things that happen to humans goes on and on. The result of every one of them is almost always the same: brain waves that manifest extreme trauma—the human’s most basic response and alert system. Regardless what misfortune happens to a human being, most experts agree that getting victims rapid emergency assistance is the single best way to help them.

As the father of a 5-year-old who will be attending school next year, I’m a big believer in the future that all children will get chipped, perhaps like all children get vaccines in the U.S. It’s crazy to me that we don’t develop and use it, especially with our children. I’m looking into getting my children chipped after this alligator incident and because, as a controversial presidential candidate, I have security issues myself to worry about.

Of course, it’s not only implants. It’s chip tattoos, graphs, and more. It’s also GPS bracelets, rings, wearable tech T-shirts, or even shoes with tracking tech built into them. Interestingly, a small industry already exists around children using tech to keep their whereabouts safe, but they’re mostly children with disabilities—some who have a propensity to wander off.

Perhaps the most advanced case of chipping people has to do with the military. Reports describe special forces experimenting with them so they can be tracked. In 2014, for example, the U.S. Department of Defense announced a $26 million grant for a brain implant that would record, analyze, and potentially alter live electrical signals to those struggling with mental illnesses like post-traumatic stress disorder. The military is getting so interested in implants that I was recently asked to consult the U.S. Navy on research of chipping their service people.

All things considered, the trauma alert implant (or even just a basic GPS tracking one that goes in your hand) sounds like a sensible and impressive thing. So why don’t we have them yet, when we easily have the tech to create them?

I estimate that within a decade’s time, most people have a at least few synthetic parts merged with their body.

Unfortunately, Americans are skeptical of electronic devices in their bodies. They’ve been led to believe they either cause cancer or they’ll malfunction and cause tissue damage. But the truth is tens of thousands of people have synthetic electronic parts in their bodies. These include pacemakers and robotic heart valves, like what former Vice President Dick Cheney has. Additionally, a few hundred thousand people already have cochlear implants, which allow deaf people to hear sounds. Most of these devices pose little if any danger and end up dramatically improving health.

And this trend of technology being part of our bodies is only going to increase, since bionic parts are ultimately more durable than biological ones. I estimate that within a decade’s time, most people have at least a few synthetic parts merged with their body, whether it’s dentures, artificial hips, implants, or even robotic hearts.

Of course the no. 1 complaint about implants in our bodies is the concern of privacy and unwanted surveillance. However, just about everyone already sleeps with a cellphone by their head or keeps one in their pocket, so there’s little difference between a small implant and a phone permanently on one’s person. In fact, the phone with all its apps has a much higher probability of being tracked. Beyond that is the fact that almost anywhere you go in the modern world, there are cameras. Overcoming surveillance is something I think we all gave up a while back when we allowed tech and the internet to dominate our lives. Just consider a report out in the U.K. that says that there may be as many as 4.2 million cameras in the country. Chicago has over 10,000. We may need to face the facts: We already live in a surveillance society.

The good news is, we’ll always have the option to turn an embedded chip implant off, just like we can turn our phones off. So the control will ultimately rest with us.

But perhaps the largest reason some people are wary of implants is religion. In America, 75 percent of the population believes in some form of the Bible, and Revelations talks about the Mark of the Beast. When I was on my campaign bus tour and pointed out at rallies that I had an implant, I could literally feel the energy in the air change if people were religious. Bible-believing people looked at me differently, like the implant was a tool of Satan.

The reality is that when the U.S. government issued social security numbers decades ago, religious people said the numbers were the Mark of the Beast too. Frankly, as a declared atheist, I think religious people should give such apocalyptic stuff a rest and be thankful the transhumanist age will improve humanity’s overall well-being. The future of healthcare involves us becoming more cyborg-like, and that will ultimately lead to better health for everyone. When it comes to our loves ones, ensuring their optimum health is the highest priority—and is also quite in line with religious doctrine, too.

There are a lot of reasons to advocate for supporting implants. And it’s the reason I believe chipping is going to catch on in a major way in the next few years. It’s just too bad it hasn’t yet, and as a result, humans are not a prepared to deal with some of the tragedies that occur.

Hopefully in the future, though, technology will break through and make all our lives much safer.

Zoltan Istvan is a futurist and the 2016 U.S. presidential candidate of the Transhumanist Party.