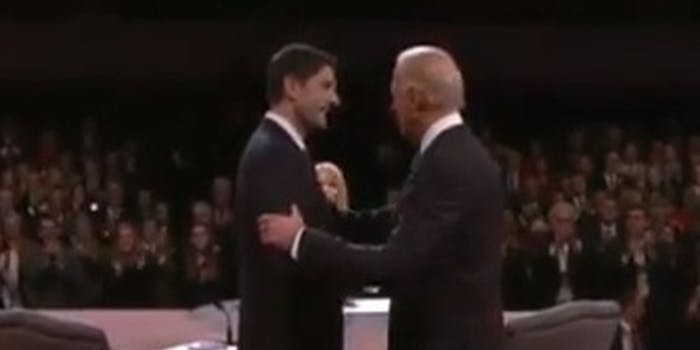 The quick-to-the-draw Barack Obama campaign hopped aboard a number of steamrolling hashtags and Twitter searches Thursday night, buying promoted tweets to display at the top of several searches.

During the vice presidential debate, Twitter displayed ads for Obama during searches for “malarkey” (a term Vice President Joe Biden used a few times in the battle), “Biden his time,” #VPdebate, “Jack Kennedy” and others.

Mitt Romney’s campaign team wasn’t idle either. It bought promoted tweets for searches of both candidates names and for the #debates hashtag page.

More than four million tweets related to the debates were sent during the course of the evening, Twitter said, with foreign policy (discussed in 26 percent of those tweets), the economy (21 percent), and taxes (16 percent) among the hot topics for the community.

The peak tweets-per-minute rate of 58,275 occurred after Biden said “Now you’re Jack Kennedy.” Ryan took second spot with 55,540 tweets per minute after claiming: “They got caught with their hand in the cookie jar turning Medicare into a piggy bank for Obamacare.”

Biden’s use of the word “malarkey” generated more than 30,000 related tweets.

Notable parody accounts to emerge during the debate included many poking fun at Biden’s often-jocular attitude such as @laughinjoebiden, @bidensteeth, and @bidensmirk. @PaulRyanGosling, which squishes together Ryan with the Ryan Gosling “hey girl” meme, was highly critical of Ryan.

With @BeanRyan disappointingly unavailable thanks to another Twitter user registering it in 2009, @BEANRYANN cropped up to poke fun at Ryan’s nickname for his daughter, which he discussed while answering a question on abortion.