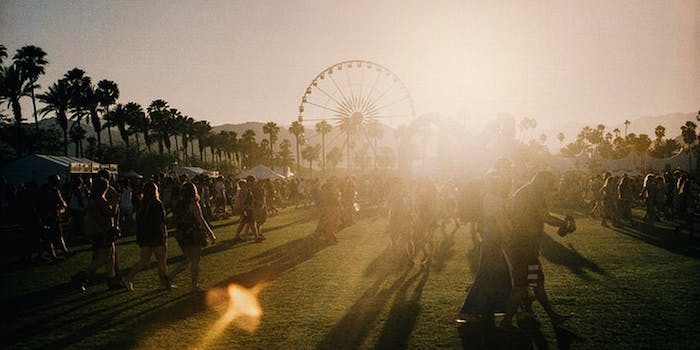 Now you don't have to endure #CoachellaWithdrawal.

Coachella was two weekends this year, and if you missed it, social media was there to fill you in on all the celebrity cameos and cultural appropriation. But what’s to stop Coachella from going to three weekends? A month? Why not build a dome over the Coachella grounds and start a vibrant work/live commune? When the end of times come, will it be a safe haven? Or will be like a scene out of The Road?

If you’d like to see what Coachella looks like as a crowd-less void, you’re in luck. A company called VRation created a site where you can experience Coachella in virtual reality, which is great for fans who are experiencing a terrifying post-fest ailment:

I´m having a serious case of #coachella withdrawal !!

The Coachella withdrawal is real

The site’s purpose is actually “communal photo sharing.” Attendees can create a gallery of photos from the 2014 festival, and post them on the site. Once a user signs up, they can “walk around and physically place new photo albums wherever they actually took place by clicking on an image in your My Pictures bar and dragging it out onto the ground in front of you. We recommend trying to place them close to where you’re standing so you don’t accidentally throw the album 100 feet away from where you are.”

No, you definitely don’t want to lose track of your photos in virtual Coachella. This is a cool feature, though; even if you didn’t attend, you can experience all the chill crowd vibes and musical performances, without the smells and crowds. Arrow keys move you around the virtual grounds, and you can even change the lighting by switching between “daytime,” “sunset,” and “nighttime.”

This tech could potentially be applied to other festivals. Think how exciting the Gathering of the Juggalos could be in virtual reality.