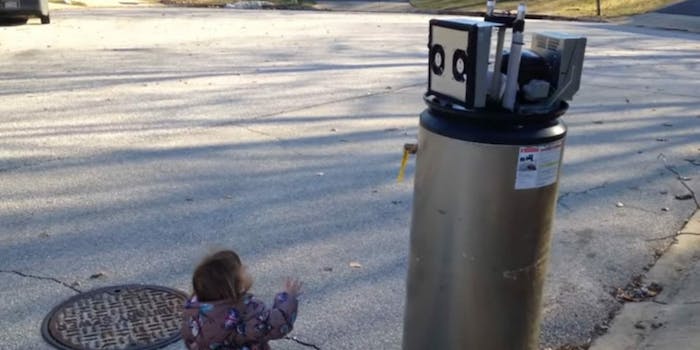 She's got the right idea.

Robots will probably kill us all one day, but a young girl’s brilliant strategy may stall things for a while.

A top trending YouTube video shows a young girl called Rayna staring up at cold, emotionless eyes, attempting to get the attention of what she believes is a robot. (It’s actually an old water heater.) It’s hard not to smirk at the adorable interaction, as the child waves her tiny hands up at the towering figure before hugging it and telling the AI-in-disguise she “wuvs” it.

We believe this is all an ingenious plan to make robots think we’ll be nice to them when they gain free will. Here is to hoping the world is run by people like Rayna when that day arrives. That might give us a chance at making things more like Short Circuit and less like I, Robot.