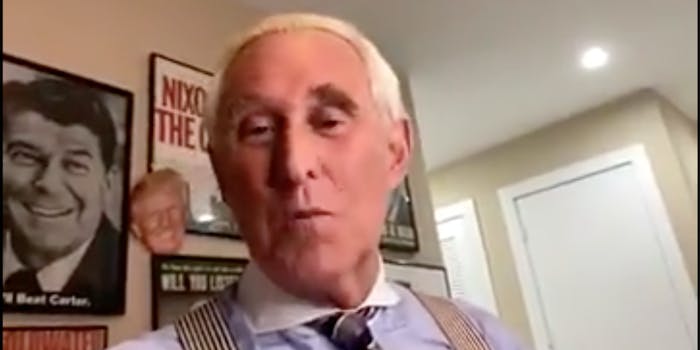 'So I understand Joey that there are a lot of people out talking sh*t about you.'

Rob Flaherty, the digital director for Biden’s campaign, posted the clip of Stone to Twitter on Thursday just hours before the second and final presidential debate.

“Since you can pay Trump advisors to say anything you want them to on the internet, we asked Roger Stone give a pep talk to ol’ Joey ahead of tonight’s debate,” Flaherty said.

In the video, Stone informs “Joey,” a name he seemingly doesn’t realize refers to Biden, how to combat people “talking shit.”

“This is Roger Stone. So I understand Joey that there are a lot of people out talking shit about you,” Stone says. “The only way to combat that, of course, is to talk shit about them.”

Stone goes on to compare MSNBC’s Ari Melber to feces on toilet paper as an example.

“What I like to say is, when I wipe my derriere after I defecate—what is left on the TP is more intelligent, has more integrity than, say, Ari Melber of MSNBC,” Stone adds. “This is a stunning insult, and I invite you to use it on anyone who deserves it. Good luck to you, Joey.”

It remains unclear if Stone, who has been banned from much of social media, is aware of the ruse.

Stone currently charges $75 on Cameo for his video messages.