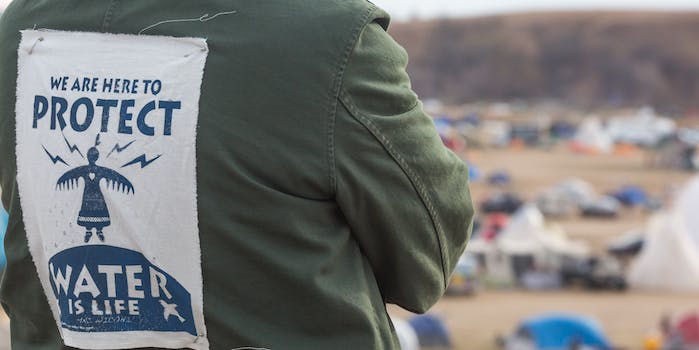 2,000 veterans to serve as ‘human shields’ for Standing Rock protesters

The veteran volunteers say they are standing up against militarized police.

Activists protesting the Dakota Access Pipeline are about to get some major help from a group that knows what it means to fight.

Some 2,000 United States military veterans have signed up to serve as “human shields” for protesters at the Standing Rock Sioux Reservation in North Dakota, where they remain locked in an ongoing and sometimes dangerous standoff with police, the New York Times reports.

The group, Veterans Stand for Standing Rock, had to close registration for its four-day event due to overwhelming response. The group hopes to bolster the activist efforts against construction of the 1,170-mile pipeline, which crosses the primary water sources for the Standing Rock Sioux tribe, including the Missouri River. The tribe also fears the pipeline’s construction will harm sacred tribal lands.

Protesters have repeatedly faced rubber bullets, water cannons, pepper spray, and other acts of force by police. To handle these actions, the veterans group suggests volunteer attendees bring “body armor, gas masks, earplugs AND shooting mufflers (we may be facing a sound cannon) but no drugs, alcohol or weapons.”

The effort, which is scheduled to take place from Dec. 4-7, comes amid an evacuation order by North Dakota Gov. Jack Dalrymple on the grounds that severe winter weather is headed to Morton County, where the protesters have set up camp.

Last week, the Army Corps of Engineers cracked down on the protester encampment and established “free speech zones” instead. U.S. authorities say anyone found at the camp after Dec. 5 could be charged with trespassing.

North Dakota State Highway Patrol spokesman Lt. Thomas O. Iverson told the Times that law enforcement authorities are aware of the veterans’ effort. “If the group remains lawful and refrains from blocking the roadway, there will be no issues,” he said.

Veterans for Standing Rock has so far raised more than $570,000 through a GoFundMe campaign to pay for “food, transportation and supplies for the brave patriots that come and stand with us.”