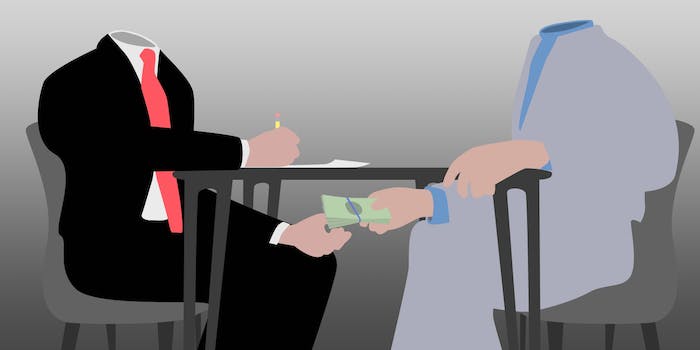 Six years to the day after the U.S. Supreme Court handed down a ruling in the case of Citizens United v. Federal Election Commission—which gave independent groups the ability to flood the political system with an unlimited torrent of cash—an appeals court ensured that, for the foreseeable future, the linkages between a given political ad and whomever paid for it will remain largely opaque.

On Thursday, a three-judge panel on the Washington, D.C., Circuit Court of Appeals unanimously upheld an FEC rule that only donors who explicitly specify their donations (greater than $1,000) be used “for the purpose of furthering electioneering communication” need to disclose their identities. Donors who give money not explicitly direct toward campaign ads (both TV and Web-based) aren’t required to make their identities public—even if those funds are ultimately put toward campaign ads.

“The arc of campaign finance law has been ambivalent, bending toward speech and disclosure,” wrote Judge Janice Rodgers Brown in the ruling. “Indeed what has made this area of election law so challenging is that these two values exist in unmistakable tension. Disclosure chills speech. Speech without disclosure risks corruption. And the Supreme Court’s track record of expanding who may speak while simultaneously blessing robust disclosure rules has set these two values on an ineluctable collision course.”

Brown insisted that it was well within the FEC’s jurisdiction to decide if laws mandating certain kinds of fundraising disclosures should be applied, adding that striking down the rule could end up making the process of making donations to nonprofits considerably more difficult.

“For instance, an American Cancer Society donor who supports cancer research but not ACS’s political communications must decide whether a cancer cure or her associational rights are more important to her,” Brown wrote. “This is categorically distinct from deciding whether a political issue, such as tax reform, is as important as one’s associational right. Cancer research isn’t a political issue, but disclosure rules of this sort would undeniably transform it into one.”

The case originated in 2011 when Rep. Chris Van Hollen, Jr. (D-Md.) sued the FEC, charging the agency’s rule violated a key tenant of the 2002 McCain-Feingold Bipartisan Campaign Reform Act (BCRA). In 2014, a U.S. District Court judge ruled in Van Hollen’s favor, insisting that the FEC’s rules about when disclosure was required were “arbitrary, capricious and contrary to law.” Thursday’s ruling, from a panel of judges all appointed by Republicans, is a reversal of that lower court’s decision.

“The district court correctly held that the Disclosure Regulation is an unreasonable interpretation of BCRA because it flouts the very purpose and policies underlying BCRA’s enactment—that is, to fix a broken campaign-finance regulatory scheme and to reveal who was actually paying for campaign ads,” Van Hollen’s legal team argued in a brief submitted in the case. “Rather than unveiling ‘all contributors’ as BCRA requires, the Disclosure Regulation has allowed those financing electioneering communications to continue to hide behind dubious and misleading names in conflict with BCRA’s goal of increased disclosure.”

Tara Malloy, deputy executive director of the pro-campaign finance reform group the Campaign Legal Center, called the decision disappointing. “[It] all but guarantees that there will be no disclosure of the donors funding the vast sums already being spent on political advertising by 501(c)(4) and other groups in the 2016 election cycle,” she said in a statement. “Once again, the Court of Appeals has effectively sanctioned the wholesale evasion of federal disclosure laws. Neither Supreme Court precedent nor the underlying statute provided any justification for the FEC to adopt a rule narrowing disclosure.”

Some political groups, on the other hand, cheered the ruling. Dan Epstein, executive director of a Koch brothers-affiliated nonprofit called Cause of Action, told Politico that the decision represented a victory for free expression. “This ruling should send a clear message to opponents of the First Amendment that their misguided efforts to silence political debate aren’t compatible with the Constitution,” Epstein said. “The right to privacy in one’s political commitments outweighs the right of taxpayer subsidized politicians to force the public identification of those for whom they disagree.”

Fred Wertheimer—president of the advocacy group Democracy 21, which supports Van Hollen, told the Associated Press that no decision has been made has been made as to whether or not they will appeal the case to the Supreme Court.